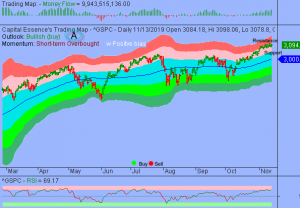 We’ve noted in the previous Market Outlook that: “while the market could continue to drift higher as trading sentiment remains strong, several leading indicators are pointing toward a fading trend.  As for strategy, traders should consider taking partial profits or at least buying downside protections on winning positions.”  As anticipated, the S&P ended slightly higher, barely setting a new closing high of 3,094, as gains were capped following report that U.S.-China trade talks have hit a snag over agricultural purchases.  The Dow Jones Industrial Average added 0.3 percent to 27,783.59 while the Nasdaq Composite closed just below the flatline at 8,482.10.  The CBOE Volatility Index (VIX), widely considered the best gauge of fear in the market, rose more than 2 percent to 12.99.

Bank stocks sold off sharply Wednesday as treasury yields fell.  The yield on the benchmark 10-year Treasury note fell to 1.8843%, while the yield on the 30-year Treasury bond was also lower at around 2.36% as trade uncertainty fueled investor demand for safer assets like U.S. debt.  As such, the SPDR S&P Bank ETF (KBE) dropped 0.93 percent on the day, but is up nearly 23 percent year-to-date, outperformed the S&P.  Now the question is whether recent pullback is a pause that refreshes or it’s a beginning of something worse?  Below is an update look at a trade in KBE. 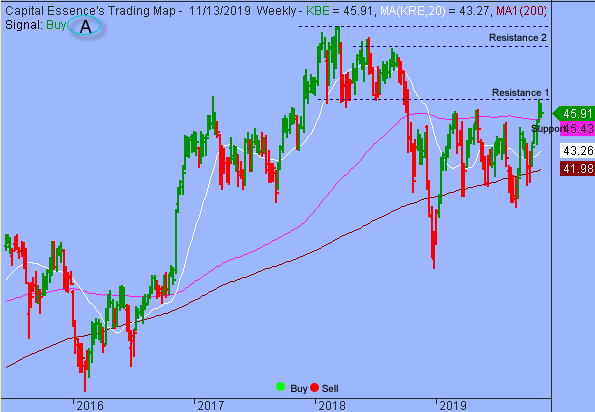 Our “U.S. Market Trading Map” painted KBE bars in green (buy) – see area ‘A’ in the chart.  KBE has been on a tear in recent weeks after the September correction found support near the 4-year moving average, a key technical level based on moving averages.  The early October massive rally pushed the ETF above the 2-year moving average, signify a bullish breakout.  The November rally is testing resistance at last September breakdown point, near 47.  This week’s downside reversal, suggested that the resistance would hold.  Nonetheless, the overall technical backdrop remains positive so pullback should be shallow and quick.  KBE has support near 45.  It’d be positive if it could hold above that level.  Resistance is around 47.  A close above that level on a weekly basis will trigger acceleration toward the 51-52 zone, or the prior highs set in 2018.

KBE has support near 45.  Short-term traders could use that level as the logical level to measure risk against. 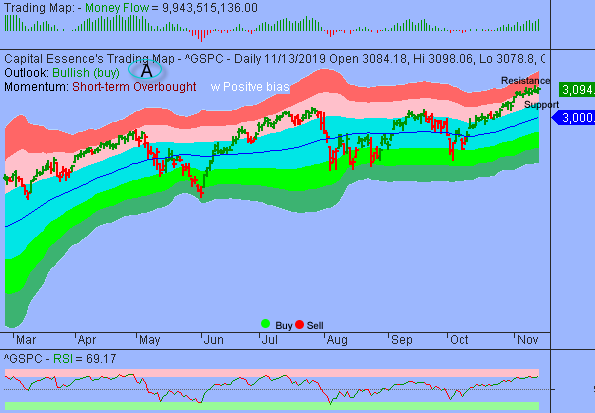 Once again, the S&P rebounded nicely after the early selloff attempt found support near the 3080 zone.  Money Flow measure trended higher from above the zero line, indicating a positive net demand for socks.  Momentum indicator is also pointing higher from near overbought zone, producing a lift to retest the important sentiment 3100 mark.  While the overall technical backdrop remains positive, we’d be cautious against taking large position at this stage amid overbought conditions.

For now, 3090 represents key support.  A close below that level will trigger selloff with initial downside target near 3070-3046. The lower boundary of the red band, near 3100, represents key price level.  A close above that level could trigger acceleration toward 3153.

In summary, although overbought condition is keeping buyers at bay, the important sentiment 3100 mark continues to act as price magnet.  Short-term traders can anticipate increase short-term volatility with rapid up and down moves in the market.