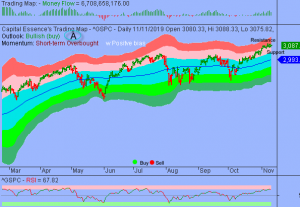 Stocks closed mixed Monday with the S&P and NASDAQ fell from record highs on Monday as uncertainty about progress in U.S.-China trade talks again rose to the fore following comments by Donald Trump.  Trump said on Saturday that the United States would only make a trade deal if it was the “right deal” for America, adding that the talks had moved more slowly than he would have liked.  For the day, the Dow Jones Industrial Average rose 0.04 percent to 27,691.49, the S&P lost 0.20 percent to 3,087.01 and the Nasdaq Composite dropped 0.13 percent to 8,464.28.  The CBOE Volatility Index (VIX), widely considered the best gauge of fear in the market, was up more than 5 percent to 12.69.

Most of the S&P sectors ended in the red, with utilities, energy and healthcare falling the most.  As such, the Utilities Select Sector SPDR ETF (XLU) fell 0.62 percent on the day, but is up 16 percent year-to-date, underperformed the S&P.  Now the question is whether recent pullback is a pause that refreshes or it’s a beginning of something worse?  Below is an update look at a trade in XLU. 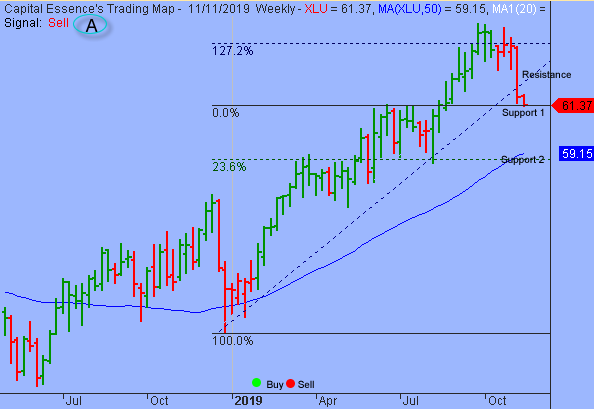 Our “U.S. Market Trading Map” painted XLU bars in red (sell) – see area ‘A’ in the chart.  This week’s downside follow-through confirmed last week’s breakdown below the 2019 rising trend line, signify a bearish reversal.  This is a negative development, increased the probability for a retest of the more important support at the 1-year moving average, a key technical level based on moving average, just above 59.  A close below 62.50 on a weekly basis will confirm this.

XLU has resistance near 62.50.  Short-term traders could use that level as the logical level to measure risk against. 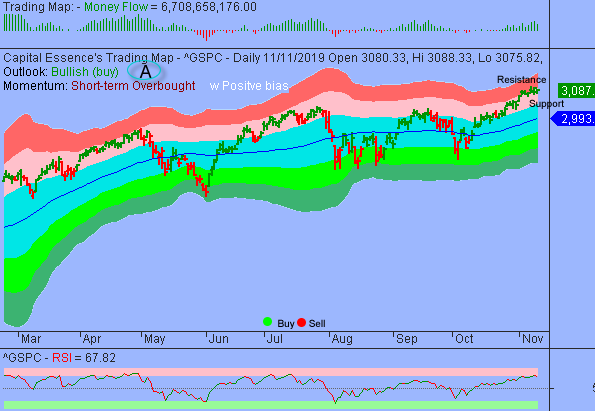 The big picture remains the same.  There is a consolidation near the lower boundary of the red band, or extreme overbought zone.  That level was tested several times over the past months.  The market often marked significant short-term tops almost every time it crossed above the lower boundary of the red band.  Momentum indicator is flashing a weak bearish signal as it shifted lower from near overbought zone.  Money Flow measure still holds above the zero line, indicating a positive net demand for stocks.  This could help putting a short-term floor under the market.

For now, 3060 represents key support.  A close below that level will trigger selloff with initial downside target near 3000. The lower boundary of the red band, near 3100, represents key price level.  A close above that level could trigger acceleration toward 3145.

In summary, recent trading actions leaving the S&P in what looks to us like an orderly high level back-and-forth consolidation of the October rally.  Technical pressures are building up as the market dances its way into an increasingly tight trading range. S&P’s 3060 marks the inflection point.  A failure to hold above key level indicates a change in sentiment and a much deeper pullback should be expected.