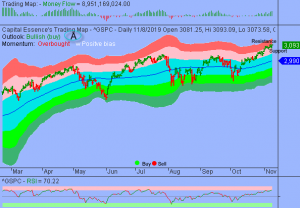 We’ve noted in the previous Market Outlook that: “Thursday’s bearish shooting star candlestick together with the fact that the S&P is overbought as it tests key overhead resistance suggesting that a short-term pullback consolidation is inevitable.  There’s a high probability that the late-day selloff will momentum but an undercut below the 3050 is needed before there is any real prospect of a change in the short-term uptrend pressure.”  As anticipated, the stocks traded lower in early Friday session following Donald Trump’s comment that he hadn’t decided whether to rescind tariffs on Chinese goods.  The S&P was down about 8 points before a recovery set in.  For the day, the bench mark gauge gained 0.25 percent to 3,093.08. The Dow Jones Industrial Average added 0.02 percent to 27,681.24. The Nasdaq Composite advanced 0.5 percent to 8,475.31.  The CBOE Volatility Index (VIX), widely considered the best gauge of fear in the market, was up more than 2 percent to 13.10.

Microsoft (MSFT) and Apple (AAPL) both hit all-time intraday highs. Microsoft closed up 1.2 percent, reaching an intraday high of $145.99. Apple, up 0.27 percent on the day, hit an all-time high of $260.44.  As such, the Technology Select Sector SPDR ETF (XLK) rose 0.56 percent on the day, and is up nearly 39 percent year-to-date, outperformed the S&P.  Now the question is whether the rally has more legs?  Below is an update look at a trade in XLK. 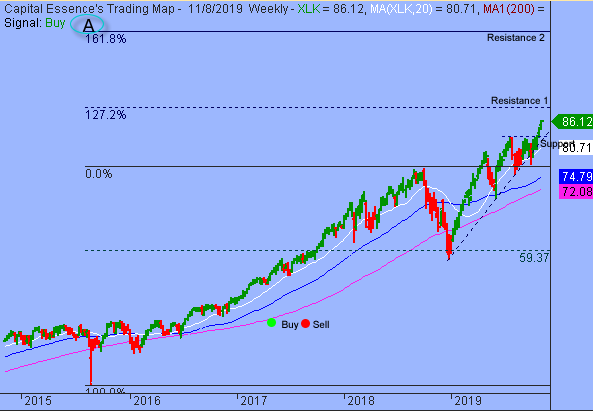 Our “U.S. Market Trading Map” painted XLK bars in green (buy) – see area ‘A’ in the chart.  Last week’s upside follow-through confirmed the early November’s bullish breakout above the prior highs set in summer 2019.  This is a positive development, setting the stage for a rapid advance toward the next level of resistance near 89, or the127.2% Fibonacci extension.  That level is significant in charting terms.  A sustain breakout above it will open up for a test of the important sentiment 100 zone, or the 161.8% Fibonacci extension.

XLK has support near 80.  Short-term traders could use that level as the logical level to measure risk against. 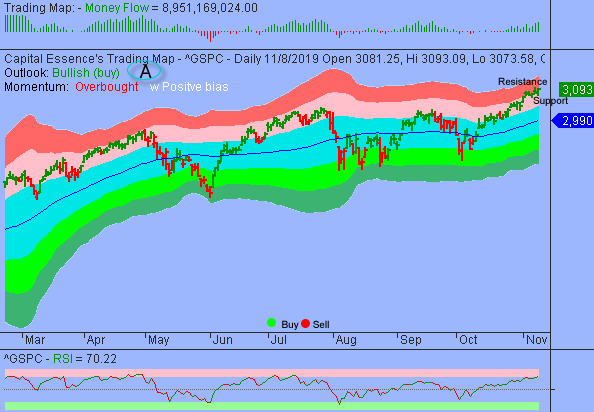 Once again, the S&P rebounded nicely after the early weakness found support near the low 3070s zone.  The index continues drifting higher near the lower boundary of the red band, or extreme overbought zone.  As mentioned, while overbought condition is normal during a pro-long uptrend, it’s suggested that upside momentum might not sustain without at least a short-term breather. The overall technical backdrop, however, remains supportive.  This certainly would argue that the near-term risk remains to the upside.  With this in mind, we would consider taking down exposure into additional strength, which we think could take S&P closer to 3100 before the big reversal kicks in.

In summary, S&P could continue to drift higher as trading sentiment remains strong. Our near-term work on momentum and price structure suggested that overbought conditions can be sustained for a few days, potentially allowing for a test of 3100 before a significant pullback unfolds.