Posted on 2019/11/08
Editor’s note: this column was originally published on Capital Essence’s CEM News. It’s being republished as a bonus for the loyal readers. For more information about subscribing to CEM News, please click here.

Stocks rose to record highs on Thursday as the latest signs of progress in U.S.-China trade relations relieved investors, but a report raising fresh worries about the outlook for a deal limited the day’s gains.  China said it had agreed with the United States to remove tariffs in phases, while state-owned Xinhua News Agency said Beijing was also considering removing restrictions on poultry imports. For the day, the Dow Jones Industrial Average rose 0.66 percent to 27,674.8.  The S&P gained 0.27 percent to 3,085.18 and the Nasdaq Composite added 0.28 percent to 8,434.52.  The CBOE Volatility Index (VIX), widely considered the best gauge of fear in the market, was up more than 2 percent to 13.10.

Chipmakers attracted strong buying support Thursday following Qualcomm Inc. (QCOM) upbeat earnings reports that saw its shares jumped 6.3 percent.  Also contributed to the overall optimism was report that U.S. and China agreed to remove existing trade tariffs. Other chipmakers, which have a sizeable exposure to China, also rose.   As such, the iShares PHLX Semiconductor ETF (SOXX) rose 0.60 percent on the day, and is up nearly 50 percent year-to-date, outperformed the S&P.  Now the question is whether the rally has more legs?  Below is an update look at a trade in SOXX.

Our “U.S. Market Trading Map” painted SOXX bars in green (buy) – see area ‘A’ in the chart.  SOXX has been on a tear in recent weeks after the September correction found support near the 2019 rising trend line.  This week’s rally pushed the ETF above the closely watch 230 zone, or the 127.2% Fibonacci extension, signify a bullish breakout.  A close above it on a weekly basis will confirm the bullish signal and trigger a rapid advance toward the next level of resistance just above 270, or the 161.8% Fibonacci extension. 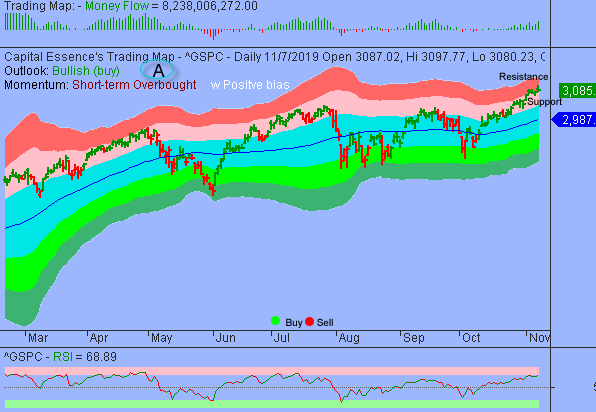 The S&P moved up to test the important sentiment 3100 zone after recent pullback found support near Monday’s bullish breakaway gap.  The index traded as high as 3097 before sellers stepped in and pushed prices off the intraday high.  In accordance to the Japanese candlestick pattern recognition, Thursday’s bearish topping tail, or shooting star candlestick, is a clear indication of supply overwhelming demand.  Adding to concerns is the overbought conditions.  While overbought condition is normal during a pro-long uptrend, it’s suggested that upside momentum might not sustain without at least a short-term breather. The overall technical backdrop, however, remains supportive.  With this in mind we’d consider increase exposure into short-term dips rather than chasing breakouts.

In summary, Thursday’s bearish shooting star candlestick together with the fact that the S&P is overbought as it tests key overhead resistance suggesting that a short-term pullback consolidation is inevitable.  There’s a high probability that the late-day selloff will momentum but an undercut below the 3050 is needed before there is any real prospect of a change in the short-term uptrend pressure.