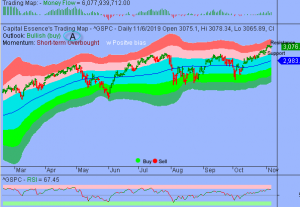 We’ve noted in the previous Market Outlook that: “recent trading actions leaving the S&P in what looks to us like an orderly high level back-and-forth consolidation of the October massive rally.  There is a high probability that the upper and lower limit of a short-term trading range has been set between the 3035 and 3085 levels on the S&P.  Short-term traders can anticipate continued volatility with rapid up and down moves in the markets.”  As anticipated, the S&P traded lower Wednesday as a report that the U.S.-China deal could be delayed until December increased worries about how long the trade war will go on. The market however, managed to overcome the early weakness and close near the unchanged mark.  For the day, the bench mark gauge, gave up 0.01 percent to 3,074.41.  The NASDAQ dropped 28 0.34 percent to 8,406.39.  The Dow Jones Industrial Average fell 0.01 percent to 27,489.72.  The CBOE Volatility Index (VIX), widely considered the best gauge of fear in the market, was up more than 2 percent to 13.10.

Health care stocks attracted strong buying support Wednesday.  Humana Inc. (HUM) rose 3.9 percent as the health insurer reported quarterly profit that beat estimates on higher sales of its government-backed Medicare Advantage health plans.  CVS Health Corp (CVS) gained 4.9 percent after the pharmacy chain posted a better-than-expected quarterly profit, boosted by its Aetna (AET) health insurance business and pharmacy benefit management unit.  As such, the Health Care Select Sector SPDR ETF (XLV) rose 0.3 percent on the day, and is up about 9 percent year-to-date, underperformed the S&P.  Now the question is whether the rally has more legs?  Below is an update look at a trade in XLV. 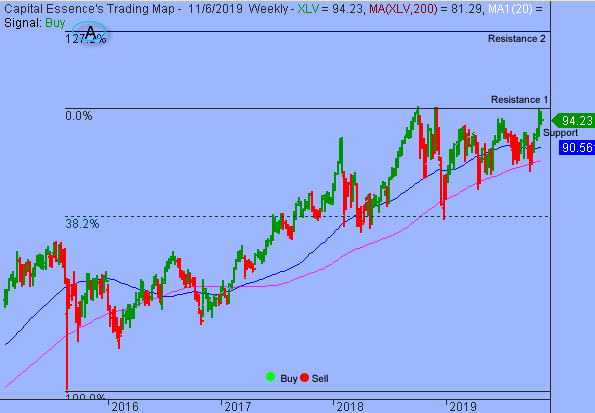 Our “U.S. Market Trading Map” painted XLV bars in green (buy) – see area ‘A’ in the chart. XLV has been on a tear in recent weeks after the July correction found support near the 2-year moving average, a key technical level based on moving averages.  The October rally is testing resistance at the 96 zone, or the prior high set in 2018.  That level is significant in charting terms.  A close above it on a weekly basis signify a bullish breakout and trigger a rapid advance toward the next level of resistance near 106, or the 127.2% Fibonacci extension.

XLV has support near 92.  Short-term traders could use that level as the logical level to measure risk against. 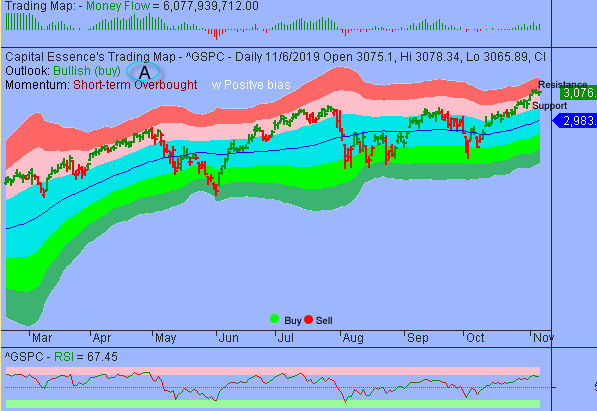 As expected, S&P moved down to test support at the 3060 zone after recent rally ran out of steam near the lower boundary of the red band.  As mentioned, a trade above that level indicated extreme overbought conditions – a situation that often precursor to a meaningful correction.  While seemingly vulnerable to some short-term setback, the overall technical backdrop remains positive.  This certainly would argue that the path with least resistance is to the upside.  With this in mind, we’d look to increase upside exposure into any pullback toward the 3067-3040 zone.

In summary, based upon recent trading action, the S&P is in a short-term overbought condition.  Although seemingly vulnerable to some short-term setback, the overall technical backdrop remains positive.  Expect the index to draw in buyers in any pullback toward the 3067-3040 zone.