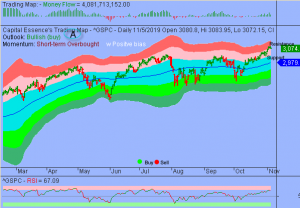 We’ve noted in the previous Market Outlook that: “S&P broke above the lower boundary of the red band Monday, signified extreme overbought conditions. This is a short-term negative development, suggesting that a short-term correction could be in the wings.”  As anticipated, the S&P closed lower Tuesday, down 0.12 percent to 3,074.62.  The Nasdaq Composite added 0.02 percent to 8,434.68.  The Dow Jones Industrial Average rose 0.11percent to 27,492.63.  The CBOE Volatility Index (VIX), widely considered the best gauge of fear in the market, was up more than 2 percent to 13.10.

Financials attracted some buying support Tuesday as benchmark U.S. Treasury yields hit a six-week high.  The 10-year Treasury note, which moves inversely to price, was higher at around 1.858 percent, while the yield on the 30-year Treasury bond was also higher at around 2.342 percent.  As such, the Financial Select Sector SPDR ETF (XLF) rose 0.37 percent on the day, and is up nearly 24 percent year-to-date, outperformed the S&P.  Now the question is whether the rally has more legs?  Below is an update look at a trade in XLF. 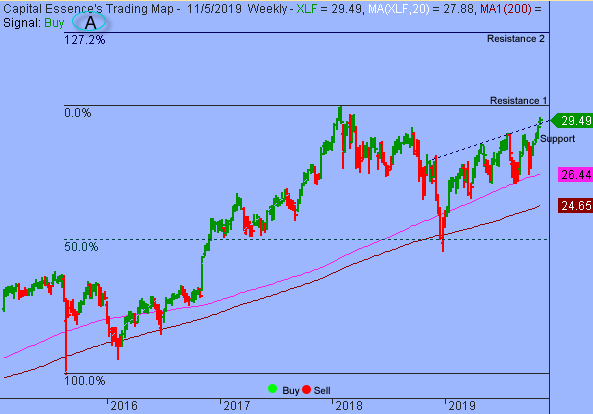 Our “U.S. Market Trading Map” painted XLF bars in green (buy) – see area ‘A’ in the chart. XLF has been on a tear in recent weeks after the late September correction found support near the 2-year moving average, a key technical level based on moving averages.  This week’s rally had helped push the ETF above the upper boundary of the rising trend channel that has been in place since early 2019.  This is a positive development, opened up for a test of the more important resistance near the 30.30 zone, or the prior high set in 2018.  That level is significant in charting terms.  A close above it on a weekly basis signify a bullish breakout and trigger a rapid advance toward the next level of resistance near 34, or the 127.2% Fibonacci extension.

XLF has support near 28.  Short-term traders could use that level as the logical level to measure risk against. 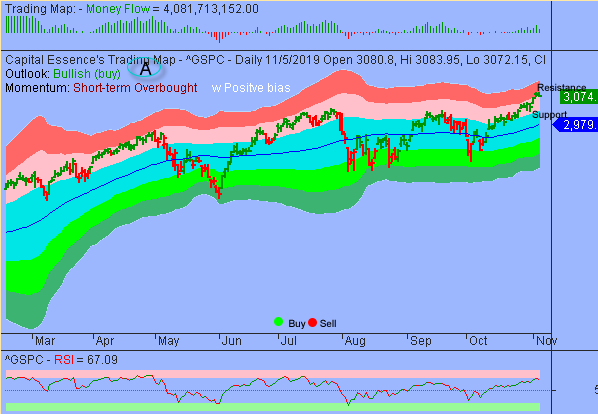 As expected, S&P fell below the lower boundary of the red band after climbed above that level on Monday.  That level is significant in charting terms.  As shown, all brief rallies toward the red band was met with waves of aggressive selling interest that pushed the index down to the lower boundary of the pink band.  Momentum indicator shifted lower from near overbought zone, suggesting further short-term weakness likely. Money Flow measure however, still hovers above the zero line, indicating a positive net demand for stocks.  This could help putting a short-term floor under the market.  With this in mind, we’d look to increase upside exposure into any pullback toward the 3060-3035 zone.

In summary, recent trading actions leaving the S&P in what looks to us like an orderly high level back-and-forth consolidation of the October massive rally.  There is a high probability that the upper and lower limit of a short-term trading range has been set between the 3035 and 3085 levels on the S&P.  Short-term traders can anticipate continued volatility with rapid up and down moves in the markets.