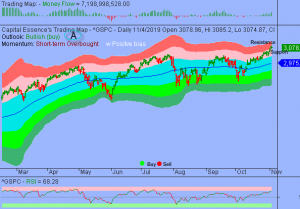 The stock-market party rolled on Monday with the Dow joining the S&P and NASDAQ in hitting record highs as investor sentiment was lifted by strong earnings, a rebound in economic data and a potential U.S.-China trade deal.  For the day, the Dow Jones Industrial Average rose 0.4 percent to 27,462.11.  The S&P climbed 0.37 percent to 3,078.27. The NASDAQ advanced 0.56 percent to 8,433.20. The CBOE Volatility Index (VIX), widely considered the best gauge of fear in the market, jumped more than 4 percent to 12.83.

Sentiment around global trade was lifted after U.S. Commerce Secretary Wilbur Ross said Sunday that American firms would be granted licenses to sell to Chinese telecom giant Huawei “very shortly.”  Trade bellwethers Boeing and Caterpillar also rose more than 1 percent each.  As such, the Industrial Select Sector SPDR ETF (XLI) rose 1.16 percent on the day, and is up 26 percent year-to-date, outperformed the S&P.  Now the question is whether the rally has more legs?  Below is an update look at a trade in XLI. 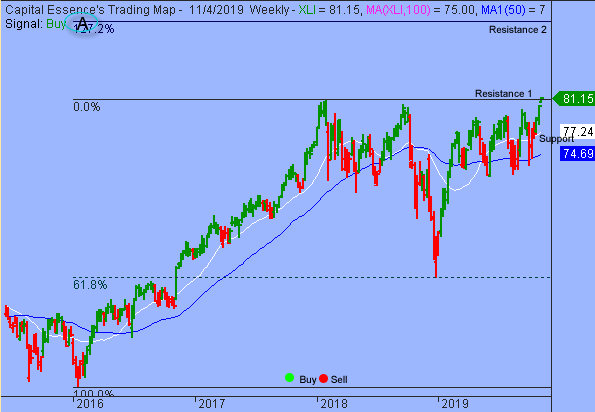 Our “U.S. Market Trading Map” painted XLI bars in green (buy) – see area ‘A’ in the chart. XLI has been on a tear in recent weeks after the mid-September correction found support near the 1-year moving average, a key technical level based on moving averages.  This week’s rally had helped push the ETF above the closely watch 81 zone, or the prior high set in early 2018.  Right now follow-through is the key. A close above 81 on a weekly basis will confirm this and trigger a rapid advance toward the next level of resistance near 90, or the 127.2% Fibonacci extension.

XLI has support near 77.  Short-term traders could use that level as the logical level to measure risk against. 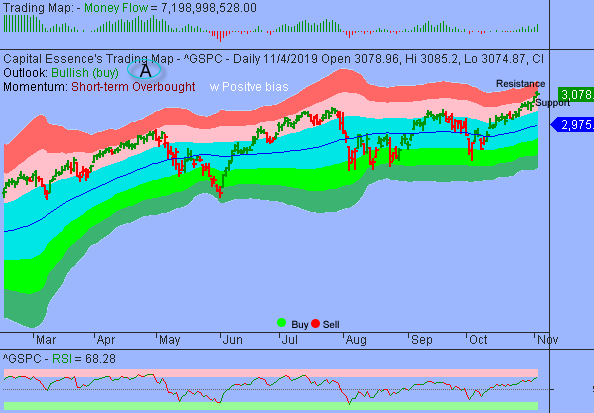 Money Flow measure however, still above the zero line, indicating a positive net demand for stocks.  This could help putting a short-term floor under the market.  With this in mind, we’d look to increase upside exposure into any pullback toward the 3050-3025 zone.

In summary, S&P broke above the lower boundary of the red band Monday, signified extreme overbought conditions. This is a short-term negative development, suggesting that a short-term correction could be in the wings.  Nevertheless, with Money Flow measure above the zero line the path with least resistance remains higher.  With this in mind, we’d look to increase upside exposure into short-term market dips.