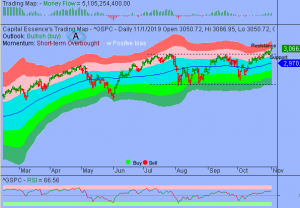 Stocks rose sharply on Friday as investor sentiment got a lift from much stronger-than-expected U.S. jobs data.  The Labor Department’s report that employers added 128,000 jobs in October, more than expected.  The S&P and the Nasdaq Composite hit new intraday highs and set closing highs as well, up 0.97 percent and 1.1 percent respectively. The Dow Jones Industrial Average closed within 12 points of its closing peak of 27,359.16, reached on July 15, rose 1.1 percent to 27,347.36.  The CBOE Volatility Index (VIX), widely considered the best gauge of fear in the market, fell 7 percent to 12.30.

Chip stocks were big winners, with the Philadelphia Semiconductor Index up 2.3 percent to a record close of 1,689.93. Four of the top five performers among Nasdaq 100 stocks were chip stocks, led by Skyworks Solutions (SWKS), up nearly 8 percent.  As such, the iShares PHLX Semiconductor ETF (SOXX) surged 2.30 percent on the day, and is up more than 46 percent year-to-date, outperformed the S&P.  Now the question is whether the rally has more legs?  Below is an update look at a trade in SOXX.

Our “U.S. Market Trading Map” painted SOXX bars in green (buy) – see area ‘A’ in the chart. SOXX has been on a tear in recent weeks after the September correction found support near the 2019 rising trend line.  Last week’s upside follow-through confirmed the late October bullish breakout above the closely watch 220 zone.  This is a positive development, increased the probability for a rapid advance toward the 230 zone, or the 127. 2% Fibonacci extension.  That level is significant in charting terms.  A sustain advance above it will open up for a test of the 270 zone, or the 161.7% Fibonacci extension. 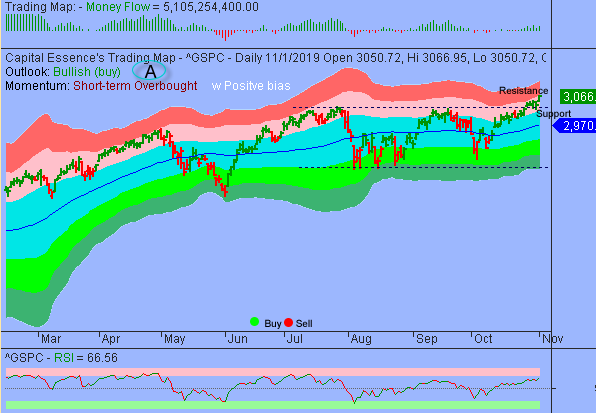 S&P moved up to test resistance at the lower boundary of the red band after recent pullback found support near 3025, or the prior high of hit on July 26.  Money Flow measure trended higher from above zero line, indicating an increase in buying pressure.  This is a bullish development but let’s notice that last week’s rally had pushed the index up against the red band, or extreme overbought zone.  As it was the case of late, a trade into the red band often marked short-term market top.  So we’d be cautious against taking large position at this stage.

In summary, the fact that market is overbought as S&P poked its head into the level that had been successful in repelling price action in the past does not favor a sustain breakout.  The overall technical backdrop however, remains bullish so we’d look to increase upside exposure on market dips rather than chasing breakouts.