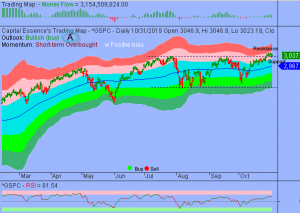 Stocks fell Thursday following report said Chinese officials have doubts about whether it is possible to reach a comprehensive long-term trade deal with Washington and Donald Trump.  For the day, the Dow Jones Industrial Average fell 0.5 percent to 27,046.23. The S&P slid 0.3 percent to 3,037.56. The Nasdaq Composite fell 0.1 percent to 8,292.36.  The CBOE Volatility Index (VIX), widely considered the best gauge of fear in the market, surged more than 7 percent to 13.22.

Data on Thursday showed a marginal rise in consumer spending in September, casting doubts on consumers’ ability to continue driving the economy, a key pillar of the current economic environment.  As such, the Consumer Staples Select Sector SPDR ETF (XLP) fell 0.15 percent on the day, but is up more than 20 percent year-to-date, slightly underperformed the S&P.  Now the question is whether recent selloff is a pause that refreshes or it’s a beginning of something worse?  Below is an update look at a trade in XLP. 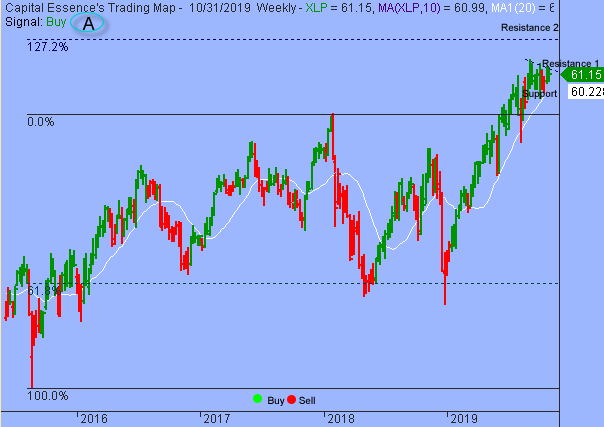 Our “U.S. Market Trading Map” painted XLP bars in green (buy) – see area ‘A’ in the chart. There is a distinct possibility that a triangle pattern is currently setting up in the weekly chart of XLP.  This week’s rally pushed the ETF up against the September falling trend line.  That level is significant in charting terms.  A sustain breakout above it signify that the 2-month triangle pattern has resolved itself into a new upswing with upside target near 63.30, or the 127.2% Fibonacci extension.

XLP has support near 60.  Short-term traders could use that level as the logical level to measure risk against. 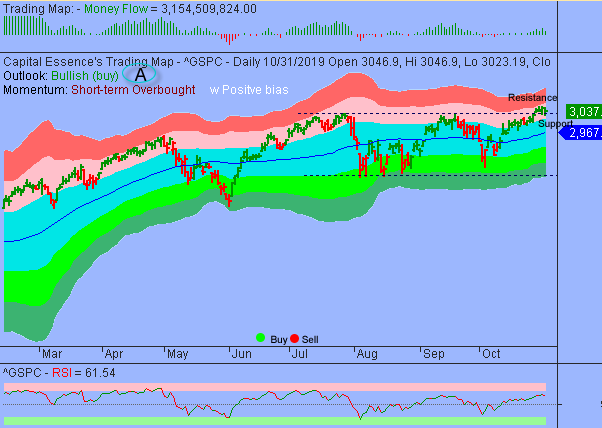 Over the next few days, traders should look for the rally and retreat behaviors near 3025, or the prior high of hit on July 26.  A failure to hold above it suggests shows that most of the potential buyers at this level had already placed their bets.  The next batch of buyers typically sits at a much lower level. The result is that the decline has a clear run down to the next support level at the important sentiment 3000 mark.

In summary, based upon recent trading action, the S&P is in a short-term overbought condition.  Although seemingly vulnerable to further short-term weakness, the overall technical backdrop remains positive.  So, expect the index to draw in buyers in any pullback to the important sentiment 3000 mark.