We’ve noted in the previous Market Outlook that: “S&P broke key resistance Monday, suggesting that the multi-month sideways trading pattern had resolved itself into a new upswing.  However, given the overbought conditions and looming resistance near 3050 there is no big commitment to accumulate stocks aggressively at this point.  As for strategy, traders should look to reduce exposure into overbought strength.”  As anticipated, S&P hit a new intraday high of 3,047.96 early in the session but pulled back to a 0.08 percent loss.  The Dow Jones industrials dropped a modest 0.07 percent. The Nasdaq Composite slid 0.59 percent.  The CBOE Volatility Index (VIX), widely considered the best gauge of fear in the market, climbed less than 1 percent to 13.21.

Health care stood out as the best-performing sector on Tuesday, lifted by Pfizer, Merck and HCA’s earnings beats.  Pfizer and Merck jumped 2.4 percent and 3.5 percent respectively on strong earnings.  As such, the Health Care Select Sector SPDR ETF (XLV) rose 1.42 percent on the day, and is up about 9 percent year-to-date, underperformed the S&P.  Now the question is whether the rally has more legs?  Below is an update look at a trade in XLV. Our “U.S. Market Trading Map” painted XLV bars in green (buy) – see area ‘A’ in the chart. Over the past few weeks, XLV has been trending higher after July correction found support near the 1-year moving average, a key technical level based on moving averages.  This week’s upside follow-through confirmed last week’s bullish breakout above the July falling trend line. This is a positive development, opened up for a test of the 2018 high, around 96.  That level is significant in charting terms.  A sustain advance above it will set the stage for a rapid advance toward the 107 zone, or the 127.2% Fibonacci extension.

XLV has support near 91.  Short-term traders could use that level as the logical level to measure risk against. 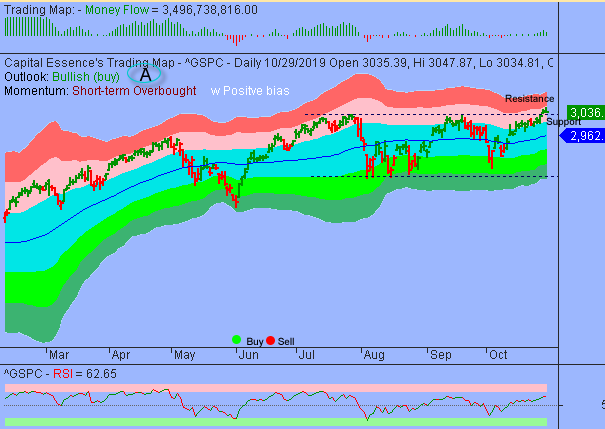 As expected, S&P moved down to test support at recent breakout point of 3025.86, or the record high of hit on July 26, after the early rally attempt ran out of steam near the lower boundary of the red band.  Market internal has been weakened but downside momentum does not appeared strong enough to generate widespread breakdowns.  For the near term, the market has carved out key short-term resistance and support levels for traders to monitor.  If S&P holds above 3025, then a breakout to new highs would be easier to be achieved.  A failure to hold above 3025 meanwhile, indicates that most of the potential buyers at this level had already placed their bets.  The next batch of buyers typically sits at a much lower level and we’re looking at 3000-2960.

In summary, our near-term work on price structure and momentum suggested that the S&P is in a midst of an overbought consolidation, which represents the digestion period in the aftermath of October’s massive rally.  Over the next few days, we will look for trading behaviors as the S&P probes key support near 3025.  A failure to hold above key support suggested that most of the potential buyers at this level had already placed their bets.  The next batch of buyers typically sits at a much lower level.