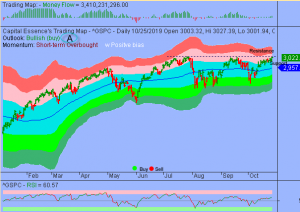 We’ve noted in the previous Market Outlook that: “overbought conditions have returned on a daily basis but momentum remains supportive so downside risk could be limited. It is possible that S&P could continue to drift higher as trading sentiment remains strong.”  As anticipated, stocks rose on Friday as investors cheered strong quarterly earnings from Intel along with apparent progress on the U.S.-China trade front.  For the day, the S&P climbed 0.4 percent to 3,022.53.  The Nasdaq Composite gained 0.7 percent to 8,243.12. The Dow Jones Industrial Average advanced 0.6 percent to 26,958.06. The CBOE Volatility Index (VIX), widely considered the best gauge of fear in the market, fell more than 7 percent to 12.65.

Intel (INTC) was among Friday’s most influential companies after it beat top and bottom-line estimates and issued upside guidance. Its 8% gain, the buying interest in other semiconductor stocks contributed to leadership of the semiconductor space.  As such, the iShares PHLX Semiconductor ETF (SOXX) jumped 2.09 percent on the day, and is up over 42 percent year-to-date, outperformed the S&P.  Now the question is whether the rally has more legs?  Below is an update look at a trade in SOXX.

Our “U.S. Market Trading Map” painted SOXX bars in green (buy) – see area ‘A’ in the chart. Over the past few weeks, SOXX has been trending higher after mid-September correction found support near the 2019 rising trend line.  Friday’s rally had helped pushed the ETF above the closely watch 220 zone, signify a bullish breakout and upside reversal.  This is a positive development, opened up for a test of the more important resistance near the 230 zone, or the 127.2% Fibonacci extension.

SOXX has support 210.  Short-term traders could use that level as the logical level to measure risk against. 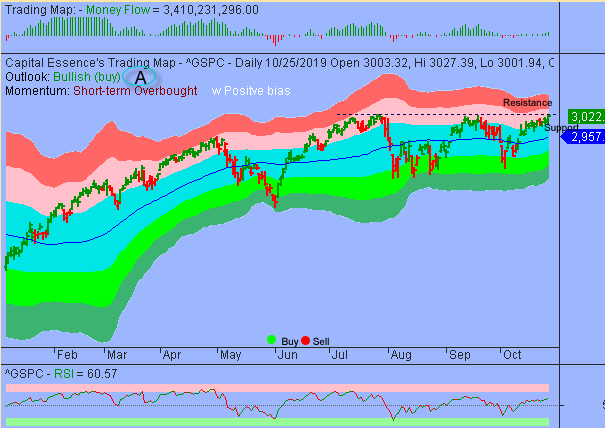 Once again, S&P moved up to test resistance near the 3030 zone.  That level was tested several times over the past months.  Market internal has been strengthened but does not appear strong enough to generate widespread breakouts.  Money Flow measure is above the zero line but the indicator is well below the July and September peaks, indicating less and less money is chasing stocks higher.  Momentum indicator trended higher but it’s much closer to overbought than oversold zone.  These elements suggested that breakout might not sustain.  With this in mind, we’d look to increase exposure into short-term market dips rather than chasing breakouts.

In summary, S&P is at key technical juncture.  Current rally is testing formidable resistance near 3030.  While the near-term technical bias remains bullish, retuned of overbought conditions together with the lagging Money Flow measure do not favor a sustain break to the upside.  As for strategy, we’d look to buy into short-term dips rather than chasing breakouts.