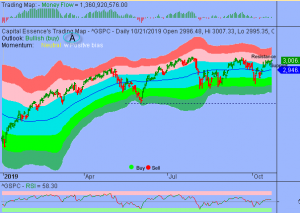 Stocks closed higher on Monday, boosted by optimism around U.S.-China trade talks as well as the corporate earnings season.  For the day, the Dow Jones Industrial Average added 0.2 percent to 26,827.64.  The S&P rose 0.7 percent to 3,006.72 while the Nasdaq Composite climbed 0.9 percent to 8,162.99.  The CBOE Volatility Index (VIX), widely considered the best gauge of fear in the market, fell more than 1 percent to 14.10.

Apple hit a new 52-week high, and many of its suppliers within the Philadelphia Semiconductor also outperformed as U.S.-China trade rhetoric remained optimistic.  As such, the iShares PHLX Semiconductor ETF (SOXX) jumped 1.97 percent for the day, and is up more than 40 percent year-to-date, outperformed the S&P.  Now the question is whether the rally has more legs?  Below is an update look at a trade in SOXX.

Our “U.S. Market Trading Map” painted SOXX bars in green (buy) – see area ‘A’ in the chart. Over the past few weeks, SOXX has been trending higher after the September correction found support near the 2019 rising trend line. The October rally is testing resistance at the 220 zone.  That level was tested several times over the past months.  Technically speaking, the more often support is tested the weaker it becomes.  Over the next few days, traders should monitor the rally and retreat behaviors as the 220 zone is tested.  A sustain advance above that level will open up for a test of the 127.2% Fibonacci extension, just above 230.

SOXX has support near 210.  Short-term traders could use that level as the logical level to measure risk against. 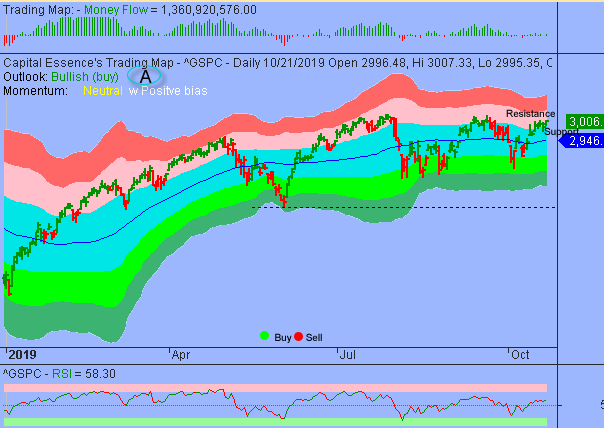 Once again, S&P moved up to test the prior high set in July after recent pullback was met with a new wave of buying interest.  With Monday gains, the index is just 0.7percent from hitting the record high of 3,027.98.  Momentum has strengthened and remained favorable over the short to intermediate term.  Nonetheless, Money Flow measure continues to lag price actions.  The indicator hovers near the zero line as prices ascending, indicating a lack of commitment.  Adding to concerns is the overbought conditions.  While overbought condition is normal during a pro-long uptrend, it’s suggested that upside momentum might not sustain without at least a short-term breather.  With this in mind, we’d look to reduce exposure into overbought strength, which might take the S&P closer to 3030 before a significant pullback unfolds.

In summary, the fact that market is overbought as S&P poked its head into the level that had been successful in repelling price action in the past does not favor a sustain breakout.  The overall technical backdrop however, remains bullish so we’d look to reduce exposure into overbought strength, which might take the S&P closer to 3030 before a significant pullback unfolds.