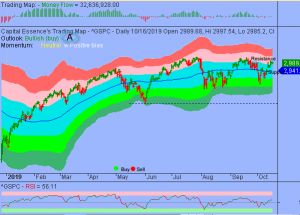 We’ve noted in the previous Market Outlook that: “S&P climbed above the lower boundary of the pink band, clearing an important hurdle.  However, given looming resistance at the important sentiment 3000 mark, there is no big commitment to accumulate stocks aggressively until this resistance zone is eclipsed.  As for strategy, traders should consider buying into short-term market dips rather than chasing breakouts.”  As anticipated, stocks closed lower Wednesday as investors weighed negative macro news against another set of mostly positive earnings results.  For the day, the S&P dipped 0.20 percent to 2,989.69. The Nasdaq Composite slid 0.30 percent to 8,124.18.  The Dow Jones Industrial Average gave up 0.08 percent to 27,001.98. The CBOE Volatility Index (VIX), widely considered the best gauge of fear in the market, rose more than 1 percent to 13.68.

Eight of the 11 S&P sectors closed near their flat lines.  The consumer discretionary and consumer staples sectors outperformed despite an unexpected 0.3% month over month decline in retail sales for September.  As such, the Consumer Staples Select Sector SPDR ETF (XLP) regained some of the prior session lost, added 0.1 percent for the day, and is up about 19 percent year-to-date, slightly underperformed the S&P.  Now the question is whether recent the rally has more legs?  Below is an update look at a trade in XLF. 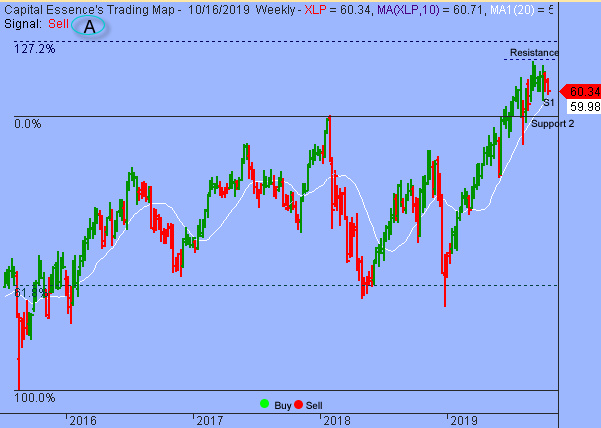 Our “U.S. Market Trading Map” painted XLP bars in red (sell) – see area ‘A’ in the chart. Over the past few weeks, XLP has been trending lower in a short-term corrective mode after the early August rally ran out of steam just below the 127.2% Fibonacci extension.  This week’s downside follow-through confirmed last week’s bearish reversal signal.  This is a negative development, increased the probability for a test of support near the 59 zone, of the 2018 high.  A close below 60 on a weekly basis will confirm this.

XLP has resistance near 62.  Short-term traders could use that level as the logical level to measure risk against. 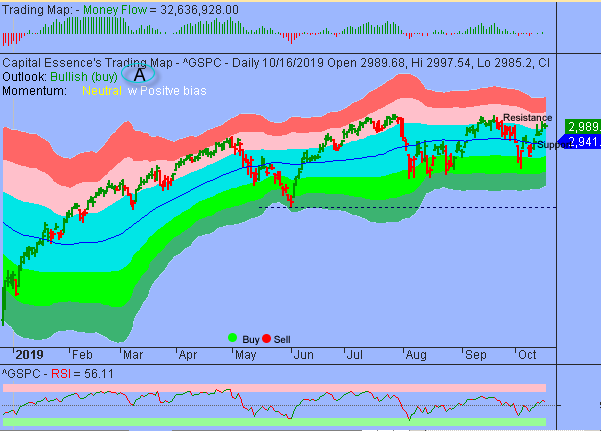 S&P consolidates near the lower boundary of the pink band after climbed above that level on Tuesday.  Momentum indicator shifted lower from near overbought zone but remains favorable over the short to intermediate term.  Money Flow measure trended lower and is on a verge of falling below the zero line, indicating a lack of commitment.  These elements suggested that Wednesday’s weakness is merely a pause that refreshes rather than a beginning of a new downswing.

Right now, the most important thing to watch is trading behavior as the 3000 zone is tested. S&P is now at a key juncture.  It is testing formidable resistance from below. We’d turn particular bullish if S&P closes twice above that level.

In summary, S&P shifted to consolidation mode after the September rally ran out of steam near the important sentiment 3000 mark.  While momentum remains favorable over the short to intermediate term, the bulls need to hurdle and sustain above 3000.  The longer the index stays below that level, the more vulnerable it is to lower prices.  This is the real danger in the current market.