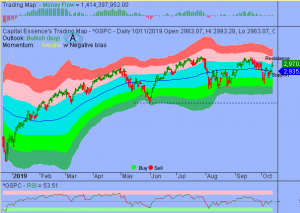 Stocks rallied on Friday following report that China and the U.S. reached the first phase of a substantial trade deal that delays tariff hikes that were set to kick in next week. The S&P stopped short of hitting a fresh high, surrendering 20 points just before the close after Donald Trump later said that a “very substantial phase 1 deal” has been reached.  For the day, the bench mark gauge rose 1.1 percent to 2,970.27, while the Nasdaq Composite jumped 1.3 percent to 8,057.04.  The Dow Jones Industrial Average added 1.2 percent to 26,816.59.  The CBOE Volatility Index (VIX), widely considered the best gauge of fear in the market, fell more than 11 percent to 15.58.

U.S. dollar took a leg lower shortly after the Federal Reserve confirmed what starting Tuesday, the FED will begin purchasing Treasury bills at a pace of $60 billion per month. The purchases will continue into the second quarter of next year or longer. In addition to these purchases, the FED will continue conducting regular overnight and term repurchase operations through at least January.  As such, the Invesco DB US Dollar Index Bullish Fund (UUP) fell 0.37 percent for the day, and is up just a little more than 5 percent year-to-date.  Now the question is whether recent pullback is a pause that refreshes or it’s a beginning of something worse?  Below is an update look at a trade in UUP. 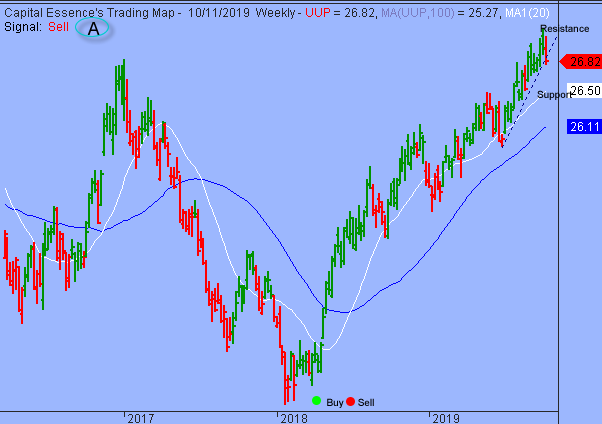 Our “U.S. Market Trading Map” painted UUP bars in red (sell) – see area ‘A’ in the chart. Over the past few weeks, UUP has been trending lower in a short-term corrective mode after the late June rally ran out of steam just above 27.  Last week’s selloff pushed the ETF below the June rising trend line, signify a bearish breakout and downside reversal.  This is a negative development, increased the probability for a test of support near the 26.50 zone.  Below it, a more significant support lies just above 26.

UUP has resistance just above 27.  Short-term traders could use that level as the logical level to measure risk against.

S&P moved up to test the bull marked high set in September after breaking above the trend channel moving average.  The index traded as high as 2993, about 7 points to the important sentiment 3000 mark, before sellers stepped in and pushed prices off the intraday high.  Technically speaking, the S&P is now at a key juncture.  It is testing formidable resistance from below.

In accordance to the Japanese candlestick pattern recognition, Friday’s bearish topping tail, or shooting star candlestick, is a clear indication of supply overwhelming demand.  Perhaps a lagging Money Flow measure is the best illustration of the bears’ case.  The indicator hovers near the zero line as the prices climbed higher, indicating a lack of commitment. Technically speaking, this trading pattern exhibits characteristics of a distribution phase, the period in which smart money sell (distribute) their positions.  With this in mind, we’d look to reduce exposure into short-term market bounces.

In summary, Friday’s bearish shooting star candlestick together with the lagging Money Flow measure suggested that a short-term pullback consolidation is inevitable.  There’s a high probability that the late-day selloff will momentum but an undercut below the S&P’s 2935 is needed before there is any real prospect of a change in the short-term uptrend pressure.