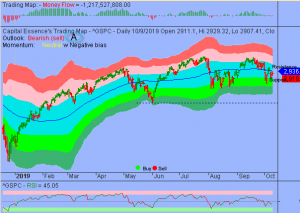 Stocks closed higher Wednesday following report that China is ready to accept a partial trade deal, lifting investor sentiment ahead of talks that are set to begin Thursday.  For the day, the Dow Jones Industrial Average climbed 0.70 percent to 26,346.01. The S&P gained 0.91 percent to 2,919.40. The Nasdaq Composite advanced 1.02 percent to 7,903.74.  The CBOE Volatility Index (VIX), widely considered the best gauge of fear in the market, fell more than 8 percent to 18.64.

Gold stocks took a breather Wednesday after surging nearly 3 percent on Tuesday when the market began to doubt that progress would be made after the U.S. blacklisted 28 Chinese firms and imposed visa bans on Chinese officials tied to human rights abuses.  As such, the VanEck Vectors Gold Miners ETF (GDX) fell 1.09 percent for the day, but is up 33 percent year-to-date, outperformed the S&P by a wide margin.  Now the question is whether recent weakness is a pause that refreshes or it’s a beginning of something worse?  Below is an update look at a trade in GDX. 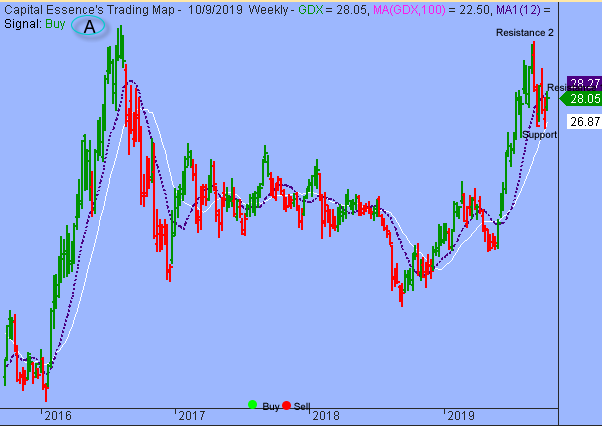 Our “U.S. Market Trading Map” painted GDX bars in green (buy) – see area ‘A’ in the chart. Over the past few weeks, GDX has been trending lower in a short-term corrective mode after the late May rally ran into resistance near the prior high set in 2016.  The September correction is testing support near the 26.50 zone.  This week’s upside follow-through confirmed last week’s bullish engulfing candlestick.  Over the next few days, traders should monitor trading behavior near 28.50.  A close above that level on a weekly basis will confirm the bullish signal and opened up for a retest of the 31 zone.

GDX has support near 26.50.  Short-term traders could use that level as the logical level to measure risk against. 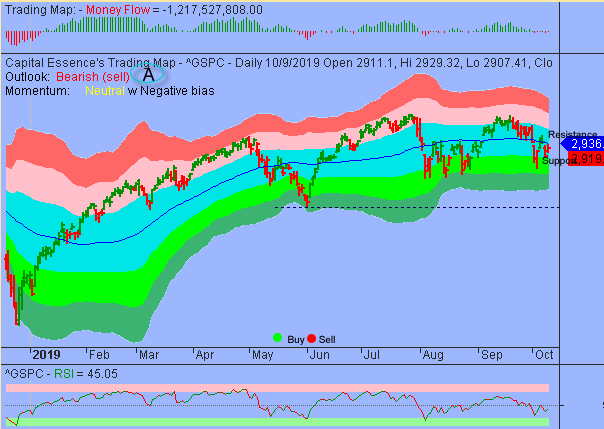 Once again, S&P rebounded nicely after recent pullback found support near the upper boundary of the green band.  Wednesday’s rally attempt tested resistance at the trend channel moving average.  The late day selloff suggested that the resistance would hold, at least for the time being.  This is a short-term negative development, suggesting that the index might have to move to a lower level to attract new buyers.  Perhaps the negative Money Flow measure is the best illustration of the bears’ case.

For the near term, the market has carved out key short-term resistance and support levels for traders to monitor.  For now, the trend channel moving average, currently at 2936, will continue to act as price magnet.  We’d turn bullish if the index closes twice above that level.  The lower boundary of the green band, around 2850, represents key support.  That level was tested several times over the past months.  It is too big and too important to fall quickly.

In summary, S&P’s oversold rally is showing signs of buyer’s fatigue, noting a struggle for the index to get past the trend channel moving average.  Nevertheless, support is strong near the 2900 zone.  Our near-term view is that there is a higher than average odd that the upper and lower limit of a short-term trading range has been set between the 2950 and 2850 levels on the S&P. So until proven otherwise, the index should bounce back and forth within that 100 points range.