Posted on 2019/10/09
Editor’s note: this column was originally published on Capital Essence’s CEM News. It’s being republished as a bonus for the loyal readers. For more information about subscribing to CEM News, please click here.

We’ve noted in the previous Market Outlook that: “Monday selloff attempt interrupted last week’s recovery rally in the S&P.  Although seemingly vulnerable to further short-term weakness, the overall technical backdrop remains positive so sell-off could be shallow because the sideline money will try to fight its way back into the market.”  As anticipated, stocks opened lower Tuesday following a series of trade developments that exacerbated concerns about upcoming trade talks and global growth prospects.  Market then cut losses after Fed Chair Powell said the Fed plans on expanding its balance sheet, but quickly faded into the close on news that the U.S. will impose visa bans on Chinese officials linked to the human rights abuses.  For the day, the Dow Jones Industrial Average fell 1.2 percent to 26,164.04. The S&P slid 1.6 percent to 2,893.06 while the Nasdaq Composite dropped 1.7 percent to 7,823.78.  The CBOE Volatility Index (VIX), widely considered the best gauge of fear in the market, surged more than 13 percent to 20.31.

Many of the China-sensitive semiconductor stocks, Nvidia, On Semiconductor, Qualcomm and Nvidia were among the biggest decliners as these companies derive a sizable portion of their revenue from China.  As such, the iShares PHLX Semiconductor ETF (SOXX) tumbled 3.1 percent for the day, but is up more than 31 percent year-to-date, outperformed the S&P by a wide margin.  Now the question is whether recent weakness is a pause that refreshes or it’s a beginning of something worse?  Below is an update look at a trade in SOXX.

Our “U.S. Market Trading Map” painted SOXX bars in red (sell) – see area ‘A’ in the chart. Over the past few weeks, XLB has been trending lower in a short-term corrective mode after the early August rally ran into resistance near the prior high set in late July.  The September correction is testing support at the 200 zone, or the 2018 high.  This level is significant in charting terms.  A close below it will break the summer 2019 uptrend and a test of the more important support near the 190 zone, should be expected.

SOXX has resistance just above 212.  Short-term traders could use that level as the logical level to measure risk against. 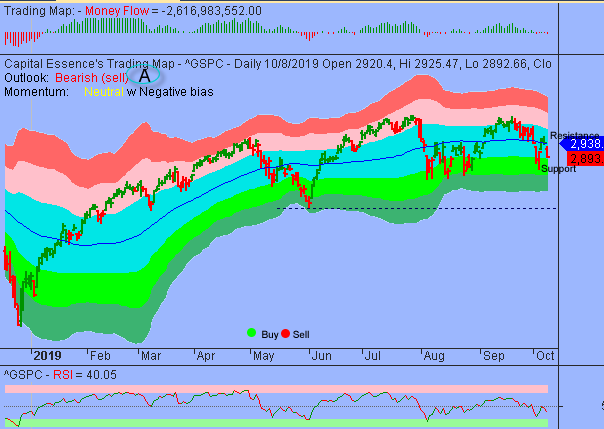 Once again, S&P retreated after recent oversold relief bounce ran out of steam near the trend channel moving average.  Momentum indicator shifted lower from near oversold zone, suggesting some short-term weakness likely.  Money Flow measure trended lower from below the zero line, indicating a negative net demand for stocks. So it should not be surprising to see some kind of a pullback, the way we had in July and August.

Over the next few days, traders should monitor trading behavior near the lower boundary of the green band, around 2840.   That level was tested several times over the past months.  A failure to hold above that level will bring the June low of 2728 into view.

In summary, daily chart of the S&P has shown signs that upside momentum is waning as the index shifted to consolidation phase.  We’re near term negative on equity as we believe market vulnerable to further downside retracement.