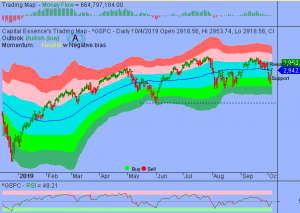 We’ve noted in the previous Market Outlook that: “S&P rebounded nicely after recent pullback found support near the lower boundary of the green band.  Our near-term work on price structure and momentum suggested that the index is in a short-term reflexive bounce.”  As anticipated, stocks closed higher on Friday as the latest U.S. jobs report hit the sweet spot with Wall Street traders.  The U.S. economy added 136,000 jobs to nonfarm payrolls in September, which was slightly below expectations but also better than expected when accounting for the upward revisions in August and July. The unemployment rate hit a 50-year low at 3.5% while average hourly earnings were unchanged.

Semis outperformed Friday after the Nikkei Asian Review reported that Apple (AAPL) asked suppliers to increase production for the iPhone 11 by up to 10 percent.  As such, the iShares PHLX Semiconductor ETF (SOXX) jumped 1.66 percent for the day, and is up more than 36 percent year-to-date, outperformed the S&P by a wide margin.  Now the question is whether rally has more legs?  Below is an update look at a trade in SOXX.

Our “U.S. Market Trading Map” painted SOXX bars in green (buy) – see area ‘A’ in the chart. Over the past few weeks, SOXX has been trending lower in a short-term corrective mode after the mid- August rally ran into resistance near the closely watch 220 zone, or the prior highs set earlier this year.  The September correction is testing support at the 2019 rising trend line.  Last week’s bullish long tail candlestick suggested that the support would hold.  Over the next few days, it’d be important to monitor trading behavior near the 220 zone.  A sustain advance above that level would suggest that the September bullish flag pattern has resolved itself into a new upswing that projects to 230 at minimum.

SOXX has support near 201.  Short-term traders could use that level as the logical level to measure risk against. 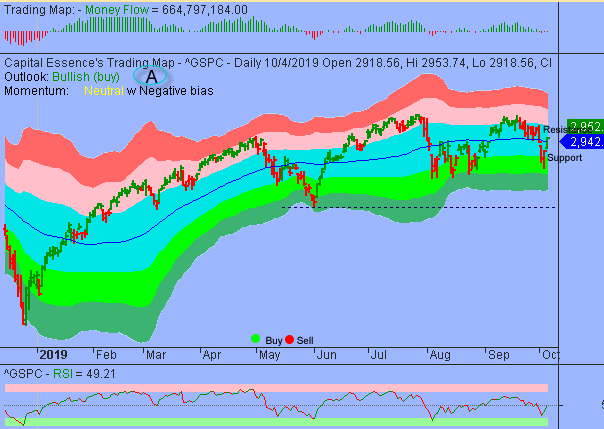 As expected, the S&P moved up to test resistance at the trend channel moving average after falling below that level earlier last week.  The late day short covering rally pushed the index above the closely watch 2942.  This is a positive development, signify an upside breakout and bullish reversal.  Money Flow measure crossed above the zero line, indicating a positive net demand for socks.  Momentum indicator shifted higher from near oversold zone, allowing additional upside probing.  Nevertheless, upside momentum does not appear strong enough to generate widespread breakouts.  Right now follow-through is the key.  A consecutive close above 2942 will confirm Friday’s bullish reversal signal and open up for a retest of the more important resistance near the 3000 zone.

In summary, market internal has been strengthened as S&P climbed above the trend channel moving average.  Right now follow-through is the key.  If the index could hold above 2942, then a retest of the important sentiment 3000 mark would be easier to be achieved.