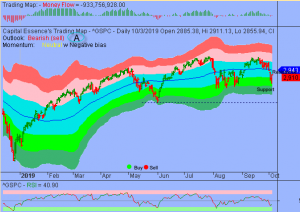 We’ve noted in the previous Market Outlook that: “Wednesday’s downside follow-through confirmed Tuesday’s bearish signal.  While seemingly vulnerable to further short-term weakness, support is strong near 2830. That level is too big and too important to fall quickly.  It could help minimize downside follow-through and widespread breakdowns.”  As anticipated, stocks briefly added to those losses on Thursday after ISM’s reading on the U.S. services sector fell last month to its lowest level since August 2016. The S&P dropped more than 1% at its lows before buyers stepped in and pushed prices higher.

Bank stocks underperformed Thursday as the yield on the 2-year note has fallen to its lowest level since Sept. 2017 as expectations for more Fed rate cuts increase. According to the CME FedWatch Tool, the probability for a 25-basis points cut at the October FOMC meeting is about 90%, and a further quarter-point cut in December is over 50%. Both are up considerably from last week. As such, the Financial Select Sector SPDR ETF (XLF) added 0.4 percent for the day, and is up more than 13 percent year-to-date, slightly underperformed the S&P.  Now the question is whether the selloff is a pause that refreshes or it’s a beginning of something worse?  Below is an update look at a trade in XLF. 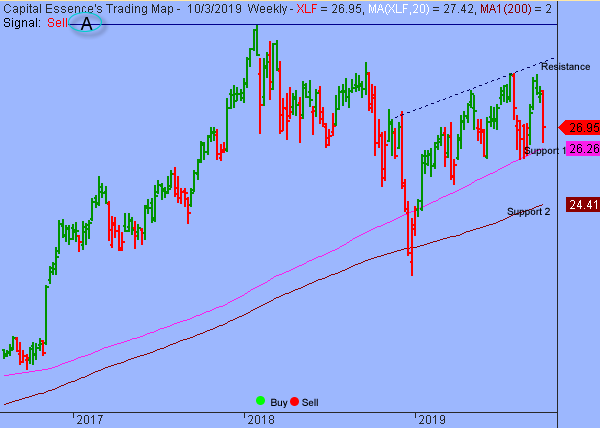 Our “U.S. Market Trading Map” painted XLF bars in red (sell) – see area ‘A’ in the chart. Over the past few weeks, XLF has been trending lower in a short-term corrective mode after the late August rally ran into resistance near upper boundary of the short-term rising trend channel that has been in place since early 2019.  This week’s selloff is testing the massive 2-conjoining support around the 26 zone, or the 2-year moving average and the lower boundary of the short-term rising trend channel.  That level is significant in charting terms.  A close below it signify bearish trend reversal and a test of the more important support near the 24 zone should be expected.

XLF has resistance near 29.  Short-term traders could use that level as the logical level to measure risk against. 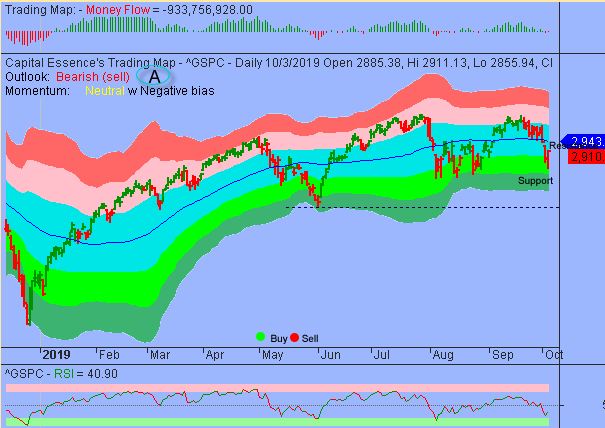 As expected, the S&P rebounded nicely off support at the lower boundary of the green band.  That level was tested several times over the past months.  This is a short-term positive development.  Momentum indicator shifted higher from near oversold zone, allowing additional upside probing.  Money Flow measure trended higher from below the zero line, indicating selling pressure had eased.

Over the next few days, trader should monitor trading behavior as the trend channel moving average is tested as resistance.  Some aggressive traders might use this level like a magnet to sell.  With that said, unless there is a close above 2943, the path with least resistance remains to the downside.

In summary, S&P rebounded nicely after recent pullback found support near the lower boundary of the green band.  Our near-term work on price structure and momentum suggested that the index is in a short-term reflexive bounce.  Nevertheless, traders will be looking for the index to close above 2943 before getting aggressively long again.