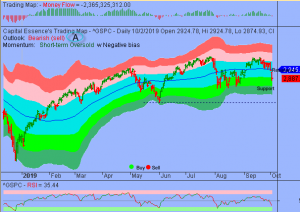 We’ve noted in the previous Market Outlook that: “S&P broke key supports Tuesday, signify resumption of the short-term downward trend that has been in place since mid-September.”  As anticipated, stocks fell sharply on Wednesday, adding to Wall Street’s poor start to the final quarter of 2019 as investors grapple with fears of an economic recession.  For the day, the bench mark gauge slid 1.8 percent to 2,887.61. The Nasdaq Composite fell 1.6 percent to 7,785.25.  The Dow Jones Industrial Average dropped 1.9 percent to 26,078.68.  The CBOE Volatility Index (VIX), widely considered the best gauge of fear in the market, surged more than 11 percent to 20.56.

Large-cap tech companies followed the broader market lower. Amazon, Apple, Alphabet, and Microsoft all dropped more than 1 percent.  As such, the Technology Select Sector SPDR ETF (XLK) tumbled nearly 2 percent for the day, but is up more than 26 percent year-to-date, outperformed the S&P.  Now the question is whether the selloff is a pause that refreshes or it’s a beginning of something worse?  Below is an update look at a trade in XLK. 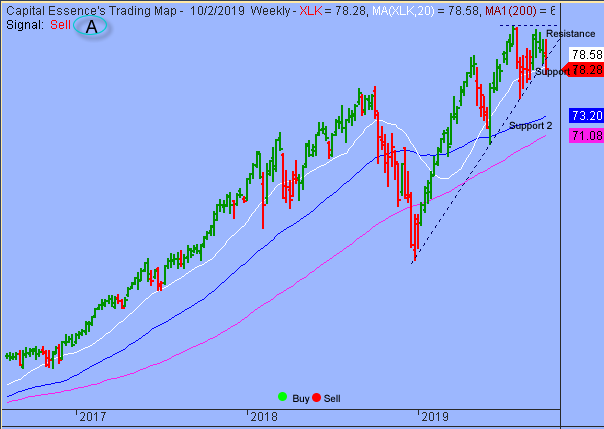 Our “U.S. Market Trading Map” painted XLK bars in red (sell) – see area ‘A’ in the chart. Over the past few weeks, XLK has been trending lower in a short-term corrective mode after the early August rally ran into resistance near the prior highs set in late July.  This week’s massive selloff pushed the ETF below the 2019 rising trend line, the level that offered support since XLK reached an interim low in late 2018.  This is a negative development, increased the probability for a test of support ear the 73 zone.   a close below 79 on weekly basis will confirm this.

XLK has resistance near 82.  Short-term traders could use that level as the logical level to measure risk against. 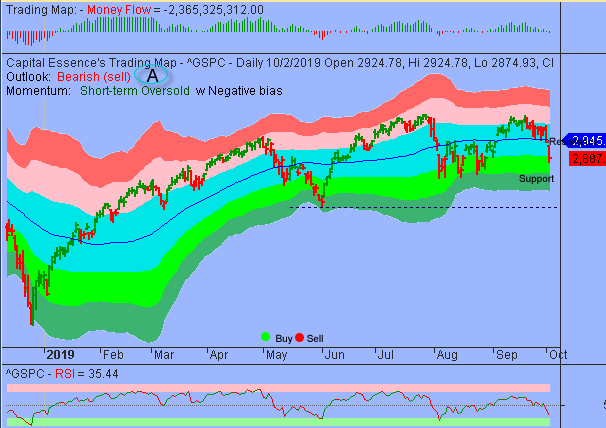 Key technical development in Wednesday session was a second close below the trend channel moving average, the level that offered support since the S&P climbed above it in early September.  This is a negative development, confirmed Tuesday’s bearish signal.  Money Flow measure fell below the zero line, another sign that selling pressure has been increased.  While seemingly vulnerable to further short-term weakness, support is strong near the 2830 zone, or the August lows.  That level roughly corresponds with the lower boundary of the green band.  These elements could help minimize downside follow-through and widespread breakdowns.