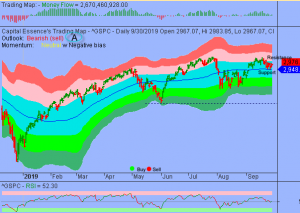 We’ve noted in the previous Market Outlook that: “we wouldn’t look too much into Friday’s trading action because it keeps the S&P within its short-term consolidation phase.”  As anticipated, S&P regained most of last Friday’s losses after the Trump administration pushed back on reports from last week about the U.S. restricting Chinese companies.  For the day, the S&P added 0.5 percent to close at 2,976.73. The Nasdaq Composite advanced 0.8 percent to 7,999.34. The Dow Jones Industrial Average rose 0.4 percent to close at 26,916.83.  The CBOE Volatility Index (VIX), widely considered the best gauge of fear in the market, fell more than 5 percent to 16.24.

Another decline in oil prices, tumbled more than 3 percent to 54.12, weighed on the oil-sensitive energy stocks.  Saudi Arabia reportedly returned to normal oil output and Chinese data continued to show weakness in the country’s manufacturing sector.  Specifically, China’s official Manufacturing PMI did improve to 49.8 in September from 49.5 August, but the reading below 50.0 indicated the sector remained in contraction territory.  As such, the Energy Select Sector SPDR ETF (XLE) fell 0.72 percent for the day, but is up more than 3 percent year-to-date, significant underperformed the S&P.  Now the question is whether the selloff has more legs?  Below is an update look at a trade in XLE. 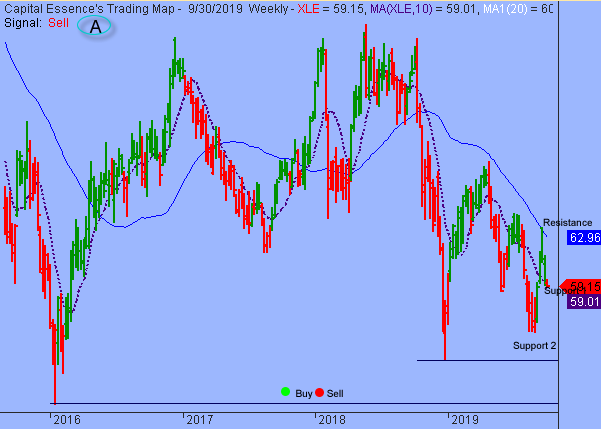 Our “U.S. Market Trading Map” painted XLE bars in red (sell) – see area ‘A’ in the chart. Over the past few weeks, XLE has been trending lower after the late August rally ran into resistance near the closely watch 1-year moving average.  The late September downswing is testing support at the 59 zone.  This level was significant when the ETF climbed above it in mid-September.  A close below that level on a weekly basis will bring the 55.50-54 zone into view. 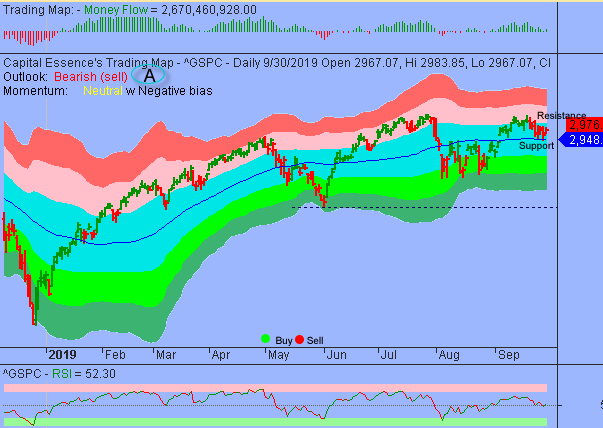 The near-term picture remains the same. There is a consolidation near the trend channel moving average after August’s oversold relief rally ran out of steam near the prior high set in late July. Money Flow measure trended steadily lower, indicating a lack of commitment.  While more backing and filling would not be a surprise, a close below the trend channel moving average, currently at 2948, would see a massive pickup in near-term volatility.

In summary, the big picture remains the same. There is a consolidation near the trend channel moving average, which represents digestion period.  S&P’s 2948 is the line in the sand.  A failure to hold above that level would trigger a new sell signal and an unwelcome pickup in downside volatility.