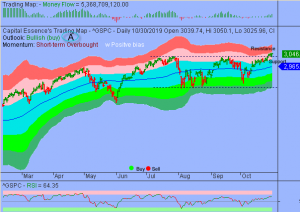 We’ve noted in the previous Market Outlook that: “our near-term work on price structure and momentum suggested that the S&P is in a midst of an overbought consolidation, which represents the digestion period in the aftermath of October’s massive rally.  Over the next few days, we will look for trading behaviors as the S&P probes key support near 3025.”  As anticipated, S&P retreated in early Wednesday session, traded as low as 3,025, after a Commerce Department report showed the U.S. economic growth slowed less than expected in the third quarter as declining business investment was offset by resilient consumer spending and a rebound in exports.  The bench mark gauge however, managed to overcome the early weakness and closed higher as investors cheered the Federal Reserve’s third rate cut of the year and comments from Chairman Jerome Powell that signaled it would be a while before the central bank hikes rates. For the day, the S&P climbed 0.3 percent to 3,046.77. The Dow Jones Industrial Average added 0.4 percent to 27,186.69. The Nasdaq Composite rose 0.3 percent to 8,303.98.  The CBOE Volatility Index (VIX), widely considered the best gauge of fear in the market, fell more than 6 percent to 12.33.

Energy related stocks were under selling pressure as oil prices extended losses Wednesday, down 0.9 percent to settle at $55.06 a barrel, after a steep U.S. crude inventory build added to worries about a possible delay in resolving the U.S.-China trade war, which has hurt global oil demand.  As such, the Energy Select Sector SPDR ETF (XLE) fell 2.04 percent on the day, but is up less than 2 percent year-to-date, underperformed the S&P.  Now the question is whether recent selloff is a beginning of an end or there’s more pains ahead?  Below is an update look at a trade in XLE. 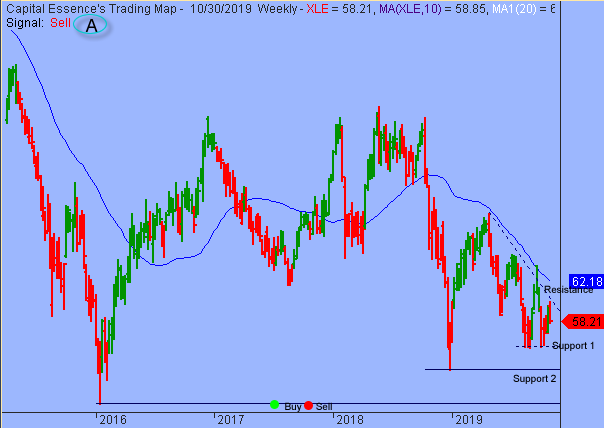 Our “U.S. Market Trading Map” painted XLE bars in red (sell) – see area ‘A’ in the chart. Over the past few weeks, XLE has been trending higher after the late September correction found support near the prior low set in August.  The October rally tested and respected resistance at the 2019 falling trend line.  This is a negative development, increased the probability for a retest of the August-September lows near the 55.60 zone.   That level is significant in charting terms.  A failure to hold above it will bring the late 2018 low, just above 53, into view.

XLE has resistance near 60.  Short-term traders could use that level as the logical level to measure risk against. 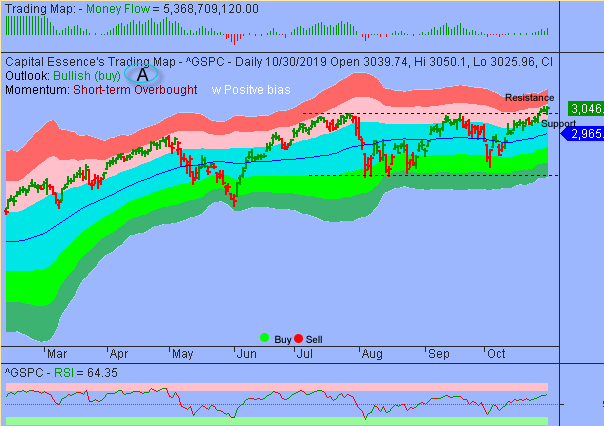 Once again, S&P rebounded nicely off after the early selloff attempt found support near recent breakout point of 3025.86, or the record high of hit on July 26.  Market internal has strengthened but the return of overbought conditions on a daily basis will put a cap on the upside.  With this in mind, we’d look to reduce exposure into overbought strength, which might take the S&P closer to the lower boundary of the red band, currently at 3060, before a significant pullback unfolds.

For now, 3025 represents key support. A failure to hold above that level indicates that most of the potential buyers at this level had already placed their bets.  The next batch of buyers typically sits at a much lower level and we’re looking at 3000-2960.

In summary, overbought conditions have returned on a daily basis but momentum remains supportive so downside risk could be limited. It is possible that S&P could continue to drift higher as trading sentiment remains strong.  As for strategy, traders should look to reducing exposure into overbought strength or at least buying downside protection for winning positions.