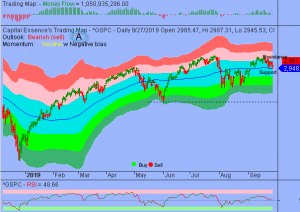 We’ve noted in the previous Market Outlook that: “market is in holding pattern as traders are watching to see whether or not the S&P can hold above 2950.  Market internal has weakened, suggesting that the support might not hold for long.  A failure to hold above key price level means that long-term buying pressure has finally been exhausted.  On balance, we remain near term neutral/negative for S&P as we believe market vulnerable to some downside retracement over the short-to-intermediate term.”  As anticipated, stocks fell on Friday after reports that the White House is now considering limits to U.S. investment in China. Stocks with exposure to China including Boeing and Apple fell following the news of the administration’s considerations, which if pursued could endanger billions of dollars in investments tied to major indexes and escalate the trade war. Chinese stocks trading on U.S. exchanges dropped on fears they could be delisted, with shares of Alibaba losing 5 percent.

Chipmaker stocks got hit hard on the week’s final day of trading. Nvidia and Applied Materials both fell more than 3 percent while Micron, which announced weaker guidance on Thursday, dove 11 percent. Friday was Micron’s worst day on Wall Street since June 2015.  As such, the iShares PHLX Semiconductor ETF (SOXX) tumbled 2.34 percent for the day, but is up more than 33 percent year-to-date, outperformed the S&P.  Now the question is whether recent selloff is a pause that refreshes or it’s a beginning of something worse?  Below is an update look at a trade in SOXX.

Our “U.S. Market Trading Map” painted SOXX bars in green (buy) – see area ‘A’ in the chart. Over the past few weeks, SOXX has been trending lower in a short-term corrective mode after the early August rally ran into resistance near closely watch 220 zone, or the prior highs set earlier this year.  Right now, the most important to watch is trading behaviors as the 2019 rising trend lines, near 200, is tested as support. It’d be positive if the ETF can hold above that level.  SOXX has resistance is near 220.  A sustain advance above that level could trigger acceleration toward the 127.2% Fibonacci extension, near 233.

SOXX has support near 200.  Short-term traders could use that level as the logical level to measure risk against. 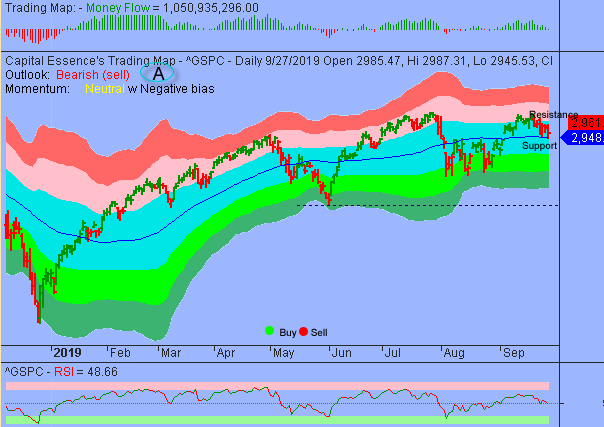 Once again, the early rally attempt was met with a new wave of selling interest.  The big picture remains the same.  There’s an orderly high-level consolidation period near the trend channel moving average.  That level is significant in charting terms.  It acted as strong resistance throughout the August consolidation phase.  It was significant when the index climbed above it in early September.  Market internal deteriorated following recent selloff but downside momentum does not appeared strong enough to generate widespread breakouts.

Right now, the most important thing to watch is the rally and retreat behaviors near 2950. A failure to hold above that level would see a pickup in near-term volatility.

In summary, we wouldn’t look too much into Friday’s trading action because it keeps the S&P within its short-term consolidation phase.  Market internal deteriorated as S&P tests key support.  The longer the index stays near that level, the more vulnerable it is to lower prices.