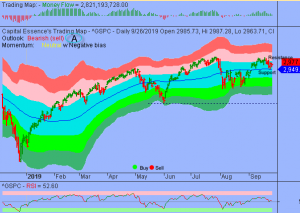 We’ve noted in the previous Market Outlook that: “there is currently a test of support at the trend channel moving average, near S&P’s 2950.  The market is no longer overbought following recent pullback but momentum is not favorable over the short to medium-term.”  As anticipated, stocks fell on Thursday as traders monitored the latest trade developments and assessed a whistleblower complaint against President Donald Trump that was released. The Dow Jones Industrial Average gave up 0.3 percent to close at 26,891.12. The S&P fell 0.2 percent to 2,977.62, while the Nasdaq Composite pulled back 0.6 percent to 8,030.66.   The CBOE Volatility Index (VIX), widely considered the best gauge of fear in the market, rose less that 1 percent to 16.07.

Tech stocks outperformed the broader market despite weakness in Facebook (FB) after reports indicated the Department of Justice will open an antitrust case into the company.  As such, the Technology Select Sector SPDR ETF (XLK) rose 0.11 percent for the day, and is up more than 30 percent year-to-date, outperformed the S&P.  Now the question is whether the rally has more legs?  Below is an update look at a trade in XLK. 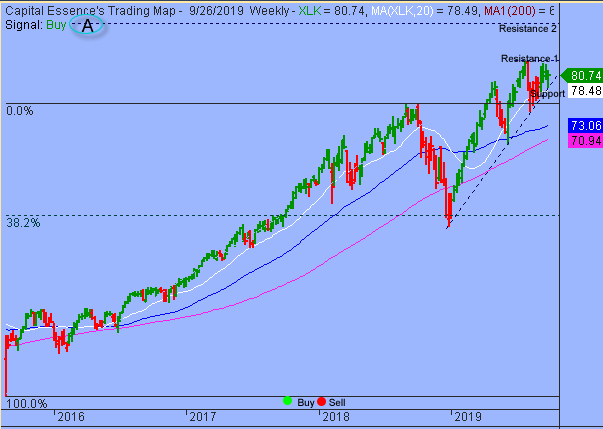 Our “U.S. Market Trading Map” painted XLK bars in green (buy) – see area ‘A’ in the chart. Over the past few weeks, XLK has been trending lower in a short-term corrective mode after the early August rally ran into resistance near the prior high set in late July.  The September correction is testing support at the 2019 rising trend line.  It’d be positive if the ETF can hold above that level.  In fact, this week’s bullish trading action suggested that the support would hold.  XLK has resistance just below 83.  A sustain advance above that level would trigger acceleration toward the 127.2% Fibonacci extension near 88.

XLK has support near 78.  Short-term traders could use that level as the logical level to measure risk against. 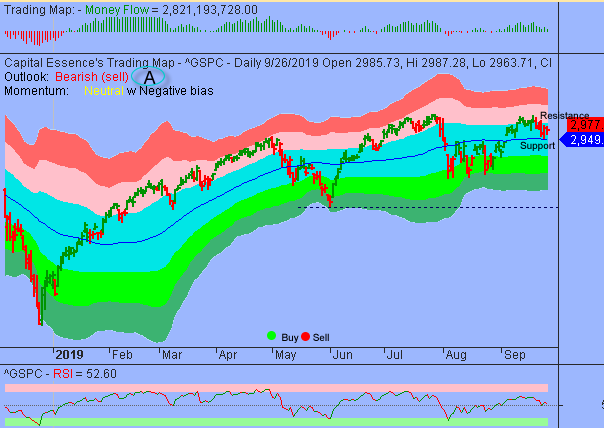 S&P continues basing sideways using the trend channel moving average as support.  That level is significant in charting terms.  It acted as strong resistance throughout the August consolidation phase.  It was significant when the index climbed above it in early September.  Market internal has weakened but downside momentum does not appeared strong enough to generate widespread breakouts.

Right now, the most important thing to watch is the rally and retreat behaviors near 2950. A failure to hold above that level would see a pickup in near-term volatility.

In summary, market is in holding pattern as traders are watching to see whether or not the S&P can hold above 2950.  Market internal has weakened, suggesting that the support might not hold for long.  A failure to hold above key price level means that long-term buying pressure has finally been exhausted.  On balance, we remain near term neutral/negative for S&P as we believe market vulnerable to some downside retracement over the short-to-intermediate term.