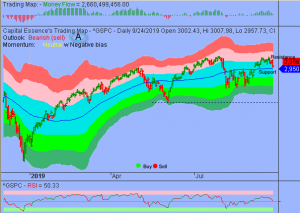 We’ve noted in the previous Market Outlook that: “trading behavior in the S&P remains constrained by a short-term sideways pattern and shown little evidence of a sustainable change in trend.  2980 is the line in the sand.  A failure to hold above that level would trigger a new sell signal and an unwelcome pickup in downside volatility.”  As anticipated, stocks took a hit on Tuesday on impeachment fears.  The S&P dropped 0.8 percent to 2,966.60. The Nasdaq Composite tumbled 1.5 percent to 7,993.63. The Dow Jones Industrial Average fell 0.5 percent to 26,807.77.  The CBOE Volatility Index (VIX), widely considered the best gauge of fear in the market, surged more than 14 percent to 17.05.

Bank shares also fell broadly as investors loaded up on Treasuries, pushing yields lower. Citigroup slid 2.4 percent while Bank of America and J.P. Morgan Chase both pulled back more than 1 percent. The benchmark 10-year yield fell to 1.637 percent.  As such, the Financial Select Sector SPDR ETF (XLF) fell 0.96 percent for the day, but is up about 17 percent year-to-date, slightly underperformed the S&P.  Now the question is whether recent pullback is a pause that refreshes or it’s a beginning of something worse?  Below is an update look at a trade in XLF. 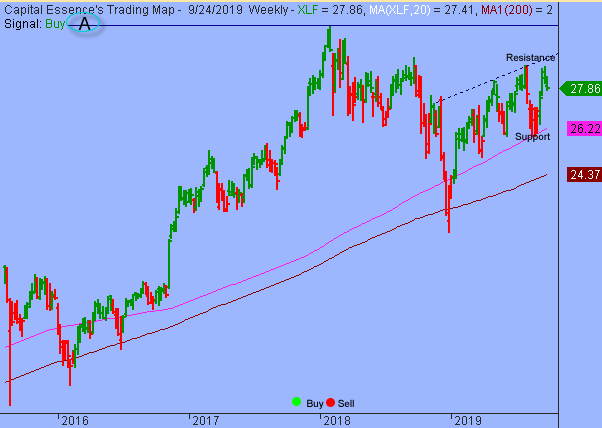 Our “U.S. Market Trading Map” painted XLF bars in green (buy) – see area ‘A’ in the chart. Over the past few weeks, XLF has been trending lower in a short-term corrective mode after the late August rally ran into resistance at the upper boundary of the 2019 rising channel.  The September correction is testing support at the late August’s breakout point, just above 27.  It’d be bullish if XLF can hold above that level.  XLF has resistance near 28.70.  A close above that level on a weekly basis will bring the 2018 high, around 30.30, into view.

XLF has support near 26.20.  Short-term traders could use that level as the logical level to measure risk against. 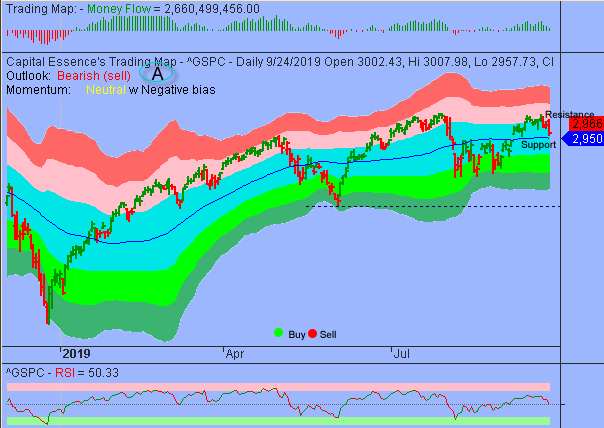 S&P moved down to test support at the trend channel moving average after falling below the important sentiment 3000 mark last week.  Market internal deteriorated but downside momentum does not appeared strong enough to generate widespread breakdowns.  Right now, the most important thing to watch is the retreat and rebound behavior near 2950. A close below that level will see pick up in volatility and a retest of the August lows, around 2830, should be expected.

In summary, market internals had been weakened as S&P moved down to test support at the trend channel moving average.  The longer the index stays near that level, the more vulnerable it is to lower prices.  This is the real danger in the current market.