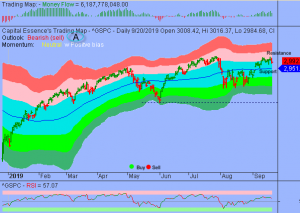 We’ve noted in the previous Market Outlook that: “Thursday’s bearish shooting star candlestick together with the fact that the S&P is overbought as it test key overhead resistance suggesting that a short-term pullback consolidation is inevitable.”  As anticipated, stocks fell Friday on news that Chinese officials were cutting short their visit to the U.S., dampening hope around trade negotiations between the two countries.  For the day, the Dow Jones Industrial Average fell 0.6 percent to 26,935.07. The S&P pulled back 0.5 percent to 2,992.09. The Nasdaq Composite dropped 0.8 percent to 8,117.67.  The CBOE Volatility Index (VIX), widely considered the best gauge of fear in the market, jumped 9 percent to 15.32.

Chipmakers got off to a weak start and remained under pressure into the close. Xilinx (XLNX) lagged from the start after the company’s CFO resigned. Texas Instruments (TXN) lost nearly 2.0% despite increasing its quarterly dividend.  As such, the iShares PHLX Semiconductor ETF (SOXX) fell 1.84 percent for the day, but up nearly 36 percent year-to-date, outperformed the S&P.  Now the question is whether recent pullback is a pause that refreshes or it’s a beginning of something worse?  Below is an update look at a trade in SOXX.

Our “U.S. Market Trading Map” painted SOXX bars in green (buy) – see area ‘A’ in the chart. SOXX retreated after the late August rally found resistance near the closely watch 220 zone.  This is a short-term negative development, increased the probability for a retest of support at the 2019 rising trend line, around 200.  It’d be bullish if the ETF can hold above that level.  SOXX has resistance near 220.  A close above it on a weekly basis could trigger acceleration toward the next level of resistance at the 127.2% Fibonacci extension, near 230.

SOXX has support near 200.  Short-term traders could use that level as the logical level to measure risk against. 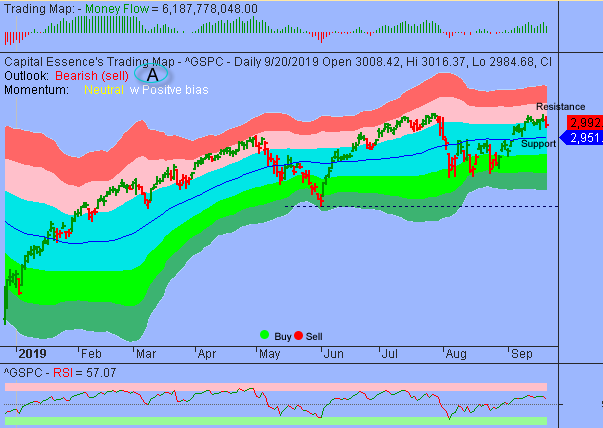 Once again, S&P sold off after the early rally attempt ran out of steam near the closely watch 3020-3030 zone.  That level was significant when the index fell below it in July and again this past week.  Technically speaking, the longer the index holds below this resistance the stronger it becomes.  Momentum has been weakened but does not appear strong enough to generate a widespread breakdown.  Right now, the most important thing to watch is the retreat and rebound behavior near 2950, or the trend channel moving average.  A close below that level on a weekly basis will bring the August lows into view.

In summary, S&P rally attempt failed at formidable resistance.   The near-term technical outlook shifted to bearish.  If the index fails to hold above 2950 this week, then the next stop will be 2900 with the possibility of a brief breakdown below that level.