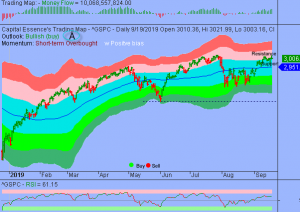 We’ve noted in the previous Market Outlook that: “trading behavior in the S&P remains constrained by a short-term sideways pattern and shown little evidence of a sustainable change in trend.”  As anticipated, the S&P closed unchanged on Thursday in a light volume session. The Dow Jones Industrial Average fell 0.2 percent to 27,094.79. The Nasdaq Composite gained less than 0.1 percent to 8,182.88.  The CBOE Volatility Index (VIX), widely considered the best gauge of fear in the market, rose less than 1 percent to 14.05.

Equity market performed poorly Thursday even as economic data came in mostly better than expected. The initial weekly claims, Philadelphia Fed Index, and Existing Home Sales upheld the market’s improved outlook for U.S. economic growth.  The industrials, financials and energy sectors, which were among this month’s leaders, were session’s laggards. While utilities and health care sector outperformed. As such, the Health Care Select Sector SPDR ETF (XLV) rose 0.42 percent for the day, bringing its year-to-date gains up to more than 6 percent, underperformed the S&P.  Now the question is whether the rally has more legs?  Below is an update look at a trade in XLV. 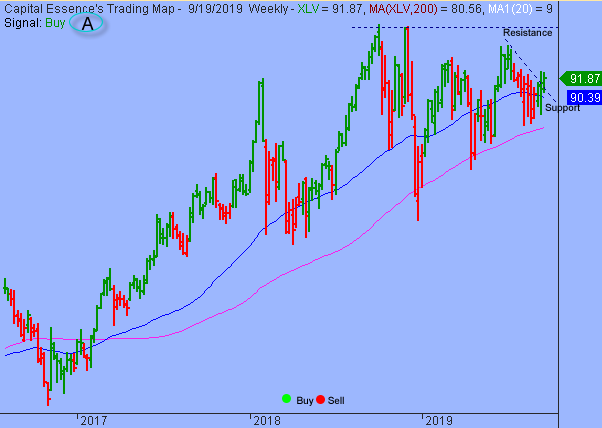 Our “U.S. Market Trading Map” painted XLV bars in green (buy) – see area ‘A’ in the chart. Over the past few weeks, XLV has been trending higher after the early July correction found support near the 2-year moving average, a key technical level based on moving averages.  This week’s upside follow-through confirmed the early September breakout above the July falling trend line, signify an upside reversal.  This is a positive development, increased the probability for a rapid advance toward the next level of resistance at the 2018 high, just above 96.

XLV has support near 90.  Short-term traders could use that level as the logical level to measure risk against. 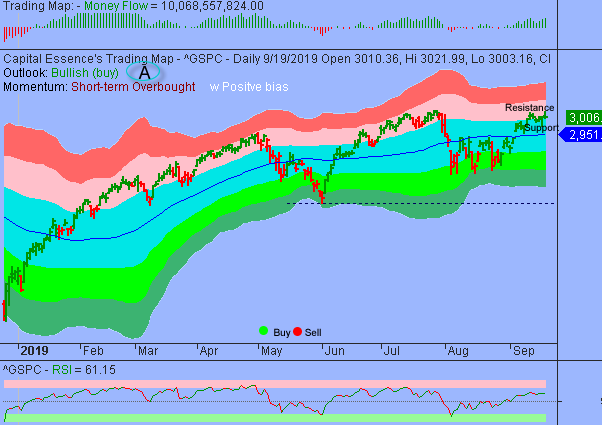 S&P moved up to test the closely watch 3020-3030 zone, or the bulls market high set in late July.  That level was tested in early September.  The index briefly broke above the early September and reached an intraday high or 3021.99 before sellers stepped in and pushed prices lower.  In accordance to the Japanese candlestick pattern recognition, Thursday’s bearish topping tail, or shooting star candlestick, is a clear indication of supply overwhelming demand.  Technically speaking, this trading pattern exhibits characteristics of a distribution phase, the period in which smart money sell (distribute) their positions.  While more backing and filling would not be a surprise, a close below 2990 would see a pickup in near-term volatility.

In summary, Thursday’s bearish shooting star candlestick together with the fact that the S&P is overbought as it test key overhead resistance suggesting that a short-term pullback consolidation is inevitable.  There’s a high probability that the late-day selloff will momentum but an undercut below the 2990 is needed before there is any real prospect of a change in the medium-term uptrend pressure.