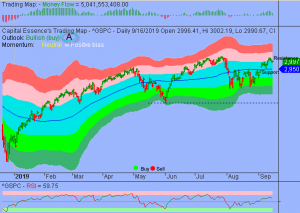 Stocks fell on Monday amid fears that a surge in oil prices following an attack in Saudi Arabia could slow down global economic growth.  For the day, the Dow Jones Industrial Average slid 0.5 percent to 27,076.82. The S&P pulled back 0.3 percent to 2,997.96. The Nasdaq Composite also dipped 0.3 percent to 8,153.54.  The CBOE Volatility Index (VIX), widely considered the best gauge of fear in the market, jumped nearly 7 percent to 14.67.

Oil-sensitive stocks attracted strong buying support Monday as WTI crude posted a biggest one-day gain, surged more than 14 percent, since 2008.  Devon Energy skyrocketed more than 12 percent while Marathon Oil jumped 11.6 percent.  As such, the Energy Select Sector SPDR Fund (XLE) had its best day of the year, jumping 3.41 percent, bringing its year-to-date gains up to more than 10 percent, underperformed the S&P.  Now the question is whether the rally has more legs?  Below is an update look at a trade in XLE. 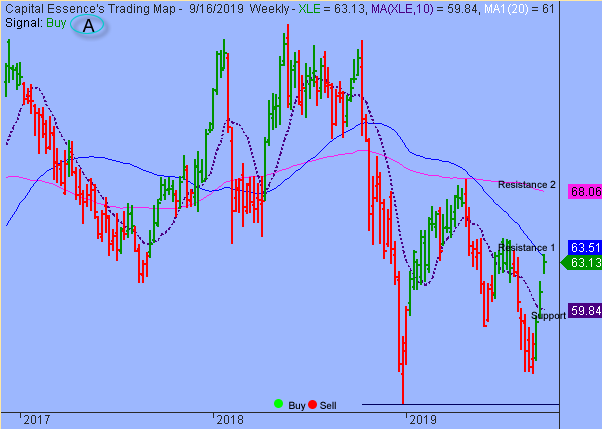 Our “U.S. Market Trading Map” painted XLE bars in green (buy) – see area ‘A’ in the chart. Over the past few weeks, XLE has been trending higher after the July selloff found support near the prior low set in late 2018.  This week’s rally pushed the ETF up against the 1-year moving average, a key technical level based on moving averages. That level was significant when the ETF fell below it in late 2018. Over the next few days, traders should monitor trading behavior as the 63.50 zone is probed.  A close above that level will trigger acceleration toward the more important resistance near the 68 zone.

XLE has support just below 60.  Short-term traders could use that level as the logical level to measure risk against. 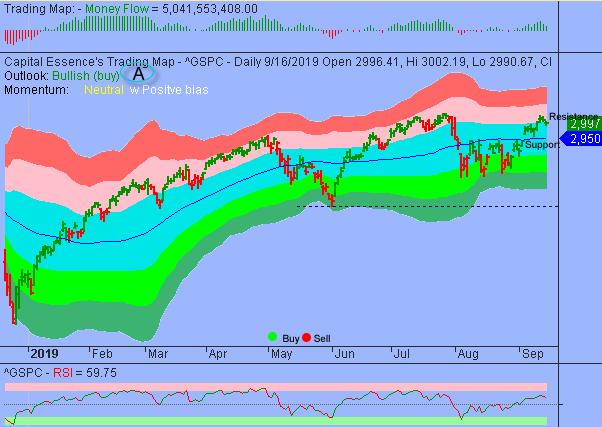 As expected, S&P fell below the lower boundary of the pink band after climbed above that level last week.  That level roughly corresponds with the important sentiment 3000 mark.  Market internal deteriorated following recent selloff but downside momentum does not appeared strong enough to generate widespread breakdown.  Right now follow-through is the key.  A close below 2985 will trigger a large scale selloff with downside target near 2968-2950.

In summary, market internal deteriorated as S&P fell below the important sentiment 3000 mark.  While seemingly vulnerable to further short-term weakness, downside momentum does not appeared strong enough to generate widespread breakdown.  This could help putting a short-term floor under the market.