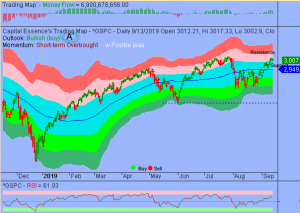 We’ve noted in the previous Market Outlook that: “Thursday’s spinning top candlestick pattern in the S&P together with short-term overbought conditions suggested that the index is at or very close to a significant near-term top. While seemingly vulnerable to short-term setback, the overall technical backdrop remains positive so it’d be bullish if the S&P can hold above the psychological 3000 level.”  As anticipated, the S&P slipped 0.1 percent to 3,007.39 as losses in crowded areas like technology and real estate offset gains in value-oriented spaces like financials and energy.  The Nasdaq Composite down 0.2 percent to 8,176.71.  The Dow Jones Industrial Average, meanwhile, rose 0.1 percent to 27,219.52.  The CBOE Volatility Index (VIX), widely considered the best gauge of fear in the market, fell more than 3 percent to 13.74.

Financials sector capped off an impressive week on a high note. The group benefited from another rise in yields, and curve-steepening, as Treasuries sold off following an uptick in retail sales and a rebound in consumer sentiment.  As such, the Financial Select Sector SPDR ETF (XLF) rose 0.78 percent on the day, bringing its year-to-date gains up to nearly 20 percent, roughly in line with the S&P.  Now the question is whether the rally has more legs?  Below is an update look at a trade in XLF. 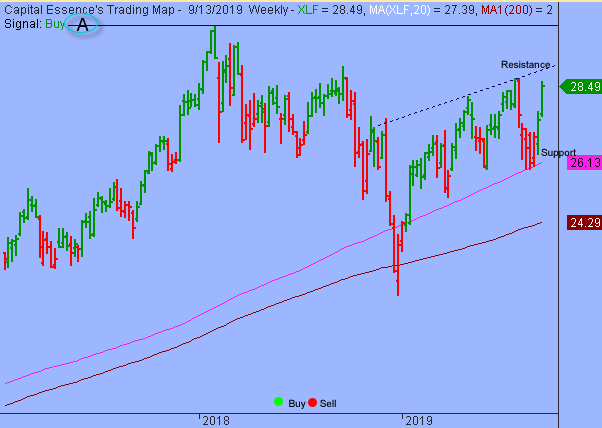 Our “U.S. Market Trading Map” painted XLF bars in green (buy) – see area ‘A’ in the chart. Over the past few weeks, XLF has been trending higher after the early August selloff found support near the 2-year moving average, a key technical level based on moving averages.  Last week’s upside follow-through confirmed the prior week’s bullish reversal signal.  Over the next few days, traders should monitor trading behavior as the early 2019 rising trend line is tested as resistance.  A close above that level will trigger acceleration toward the early 2018 high, just above 30.

XLF has support just below 27.  Short-term traders could use that level as the logical level to measure risk against. 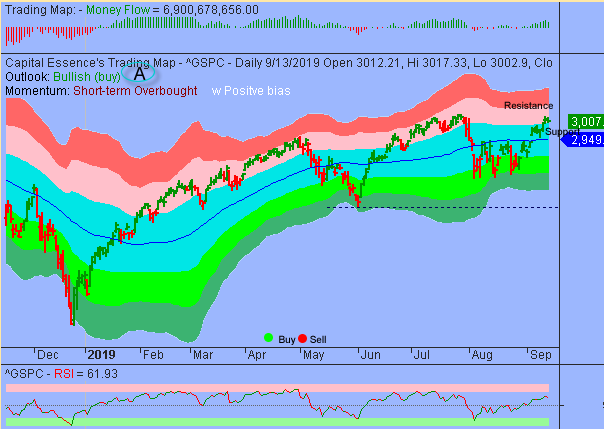 As expected, S&P retreated after recent breakout above the lower boundary of the pink band was met with a new wave of selling interest.  Momentum indicator shifted lower from near overbought zone, suggesting further short-term weakness likely.  While seemingly vulnerable to some downside retracement over the short-to-intermediate term, the overall technical backdrop remains bullish so it would be positive if the S&P can hold above the psychological 3000 level.

In summary, recent trading actions leaving the S&P in what looks to us like an orderly high level consolidation of the late August recovery rally.  The fact that S&P is holding firmly above 3000, a level it has not breached since market broke down in late July, was pretty encouraging.  Over the next few days, it will be important to monitor the retreat and rebound behaviors to determine whether recent breakout is decisive.