Posted on 2019/09/13
Editor’s note: this column was originally published on Capital Essence’s CEM News. It’s being republished as a bonus for the loyal readers. For more information about subscribing to CEM News, please click here.

Stocks closed higher Thursday, as positive-sounding trade developments and stimulus measures from the ECB helped extend the market’s September rally.  The Dow Jones Industrial Average added 0.2 percent to 27,182.45. The S&P 500 gained 0.3 percent to 3,009.57. The Nasdaq Composite advanced 0.3 percent to 8,194.47.  The CBOE Volatility Index (VIX), widely considered the best gauge of fear in the market, fell more than 2 percent to 14.22.

The trade-sensitive groups, materials, information technology and consumer discretionary outperformed following report that Donald Trump will delay the tariff rate increase on $250 billion of Chinese imports to October 15 from October 1. Those goods remain taxed at 25%, but the new 30% rate will be delayed at China’s request, as October 1 marks the 70th anniversary of the People’s Republic of China.  As such, the Materials Select Sector SPDR ETF (XLB) rose 0.78 percent on the day, bringing its year-to-date gains up to nearly 16 percent, underperformed the S&P.  Now the question is whether the rally has more legs?  Below is an update look at a trade in XLB.

Our “U.S. Market Trading Map” painted XLB bars in green (buy) – see area ‘A’ in the chart. Over the past few weeks, XLB has been trending higher after the early August selloff found support near the 1-year moving average.  This week’s upside follow-through confirmed last week’s bullish breakout above the August falling trend line.  This is a positive development, increased the probability for a rapid advance toward the prior high set in late July, just below 60.  A close above that level on a weekly basis will trigger acceleration toward the more important resistance at the early 2018 high, just above 64.

XLB has support near 57.  Short-term traders could use that level as the logical level to measure risk against. 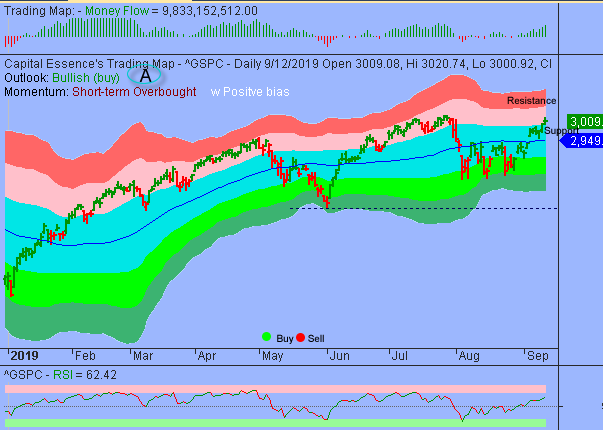 S&P moved up to test resistance at the 3020-3030 zone, or the prior high set in July 2019, following Wednesday’s bullish breakout above the one-week sideways trading range.  Thursday’s gains pushed the index above the lower boundary of the pink band, or short-term overbought zone.  Technically speaking, a trade above the level often precursor to a short-term market correction.  Additionally, in accordance to the Japanese candlestick pattern recognition, Thursday’s spinning top indicated uncertainty.  Technically speaking, when a spinning top forms after an upswing in the market, it can be an indication of a pending reversal, as the indecision in the market is representative of the buyers losing momentum. So it should not be surprising to see some backings and fillings in the coming days.  The overall technical backdrop, nonetheless, remains positive so it would be bullish if the S&P can hold above the psychological 3000 level.

In summary, Thursday’s spinning top candlestick pattern in the S&P together with short-term overbought conditions suggested that the index is at or very close to a significant near-term top. While seemingly vulnerable to short-term setback, the overall technical backdrop remains positive so it’d be bullish if the S&P can hold above the psychological 3000 level.