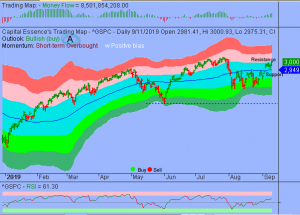 We’ve noted in the previous Market Outlook that: “the big picture remains the same. There is an orderly pullback consolidation, which represents digestion period. As for strategy, buying into short-term market dips remains the most profitable strategy.”  As anticipated, the S&P jumped on Wednesday, regained all of recent lost and some more to close at level not seen since late July, up 0.7 percent to close at 3,000.93.  The Dow Jones Industrial Average rose 0.85 percent to 27,137.04.  The Nasdaq Composite climbed 1 percent to 8,169.68.  The CBOE Volatility Index (VIX), widely considered the best gauge of fear in the market, fell nearly 4 percent to 14.61.

Apple shares closed more than 3 percent higher after climbing more than 1 percent on Tuesday. The tech giant unveiled three new iPhones on Tuesday along with a new Apple Watch and a TV subscription service. Apple also showcased a gaming subscription called Apple Arcade.  Apple provided the leadership in the tech sector.  As such, the Technology Select Sector SPDR ETF (XLK) rose 1.04 percent on the day, bringing its year-to-date gains up to 31.2 percent, outperformed the S&P.  Now the question is whether the rally has more legs?  Below is an update look at a trade in XLK. 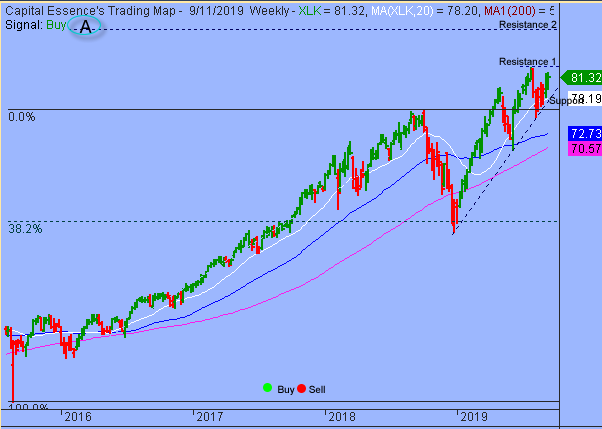 Our “U.S. Market Trading Map” painted XLK bars in green (buy) – see area ‘A’ in the chart. Over the past few weeks, XLK has been trending higher after the early August selloff found support near the late 2018 rising trend line.  This week’s upside follow-through confirmed last week’s bullish reversal signal.  This is a positive development, increased the probability for a rapid advance toward the prior high set in early Aug, just below 83.  A close above that level on a weekly basis will trigger acceleration toward the more important resistance at the 127.2% Fibonacci extension, just below 89.

XLK has support near 78.  Short-term traders could use that level as the logical level to measure risk against. 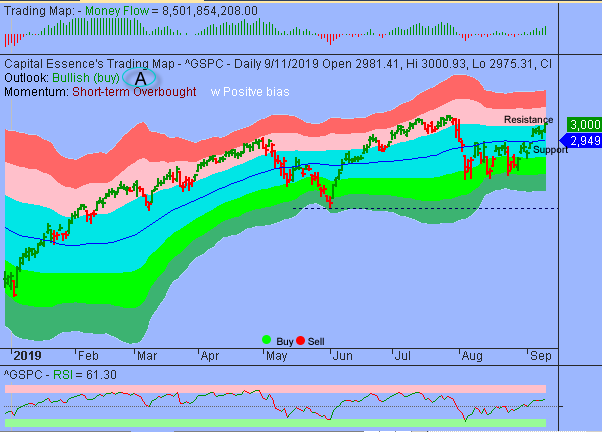 S&P moved up to test resistance at the lower boundary of the red band, or extreme overbought zone, after recent pullback found support near the trend channel moving average. That level roughly corresponds with the important sentiment 3000 mark.  Money Flow measure trended higher from above the zero line, indicating an increase in buying pressure.  Momentum has been strengthened but the return of overbought conditions on an intraday basis suggesting that upside gains could be limited.

As for support, the trend channel moving average, currently at 2949, is the line in the sand.  A close below that level would see a massive pickup in volatility.