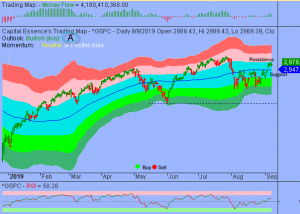 We’ve noted in the previous Market Outlook that: “several key technical indicators suggest that S&P is in a midst of a short-term consolidation phase.   The fact that the index managed to hold on to most of recent gains, indicating an internal strength.  This increases the probability that the S&P will break out from current trading range as soon as the market shakes off the excessive bullishness.”  As anticipated, stock finished little changed on Monday, with gains in energy and financial stocks helping offset the losses in the technology and health care stocks. The S&P closed just below breakeven at 2,978.43.  The Dow Jones Industrial Average posted its fourth straight gain on Monday, up 0.2 percent to 26,835.51.  . The Nasdaq Composite slid 0.2 percent to 8,087.44.  The CBOE Volatility Index (VIX), widely considered the best gauge of fear in the market, tumbled nearly 8 percent to 15.

The Dow Jones Transportation Average, which is a trade-sensitive group and is often viewed as a proxy for economic growth, outperformed after Treasury Secretary Steven Mnuchin said Monday morning that China and the U.S. have a “conceptual agreement” on enforcement mechanisms around intellectual property theft, one of the more contentious negotiation points between the two countries.  As such, the iShares Transportation Average ETF (IYT) jumped more than 2 percent on the day, bringing its year-to-date gains up to 15 percent, underperformed the S&P.  Now the question is whether the rally has more legs?  Below is an update look at a trade in IYT. 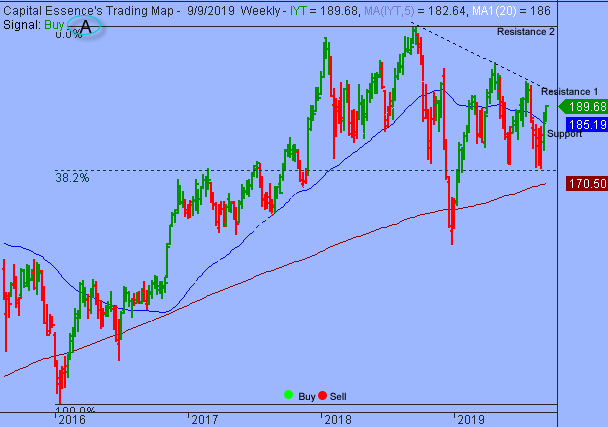 Our “U.S. Market Trading Map” painted IYT bars in green (buy) – see area ‘A’ in the chart. Over the past few weeks, IYT has been trending higher after the late July selloff found support near the 38.2% Fibonacci retracement of the 2016 upswing. This week’s rally pushed the ETF toward the late 2018 falling trend line resistance.  That level was tested several times over the past months. A sustain breakout above it will turn the medium-term trend up and trigger acceleration toward the late 2018 high near 209.

IYT has support near 185.  Short-term traders could use that level as the logical level to measure risk against. 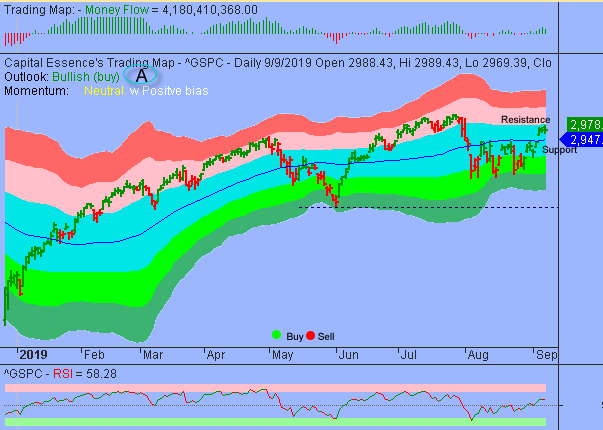 The big picture remains the same.  There is a consolidation near the lower boundary of the red band, or extreme overbought zone. That level roughly corresponds with the important sentiment 3000 mark.  That level was significant when the S&P fell below it in late July. Money Flow measure holds above the zero line, indicating a positive net demand for stocks.  This is a bullish development, suggested that the path with least resistance is still significantly higher here.

In summary, recent trading actions leaving the S&P in what looks to us like an orderly high level consolidation of last week’s bullish breakout.  The index is holding firmly above the trend channel moving average, a level it has not breached since market broke down in late July.  This is a positive development, increased the probability that the S&P will break out to new highs as soon as the market shakes off excessive bullishness.