We’ve noted in the previous Market Outlook that: “over the next couple of days, we will look for the breakout and retreat behaviors as the 2944 level is retested and as the index probes the important sentiment 3000 level.”  As anticipated, the S&P opened significantly higher in early Thursday session, traded as high as 2985, following report that the U.S. and China will hold trade talks next month.  The bench mark gauge, however, gave back some the early gains to close at 2,976, up 1.3 percent.  The Dow Jones Industrial Average rose 1.4 percent to 26,728.15. The Nasdaq Composite advanced 1.75 percent to 8,116.83.  The CBOE Volatility Index (VIX), widely considered the best gauge of fear in the market, tumbled more than 6 percent to 16.27.

Better-than-expected factory orders and non-manufacturing activity for August solidified the risk-on sentiment that was upheld throughout the rest of the session.  The trade-sensitive S&P information technology, consumer discretionary, and industrials sectors were among today’s leaders.  As such, the iShares PHLX Semiconductor ETF (SOXX) surged 3.1 percent on the day, bringing its year-to-date gains up to nearly 36 percent, outperformed the S&P.  Now the question is whether the rally has more legs?  Below is an update look at a trade in SOXX.

Our “U.S. Market Trading Map” painted SOXX bars in green (buy) – see area ‘A’ in the chart. Over the past few weeks, SOXX has been basing sideways, using the 2019 rising trend line as support after the early June rally ran out of steam just above the prior high set in late April 2019.  This week’s rally pushed the ETF up against the closely watch 220 zone.  This level was tested several times over the past moths.  Technically speaking, the more often the resistance is tested the weaker it becomes.  Over the next few days, traders should monitor trading behavior as the 220 zone is testing as resistance.  A close above that level on a weekly basis will trigger acceleration toward 230, or the 127.2% Fibonacci extension.

SOXX has support near 199.  Short-term traders could use that level as the logical level to measure risk against. 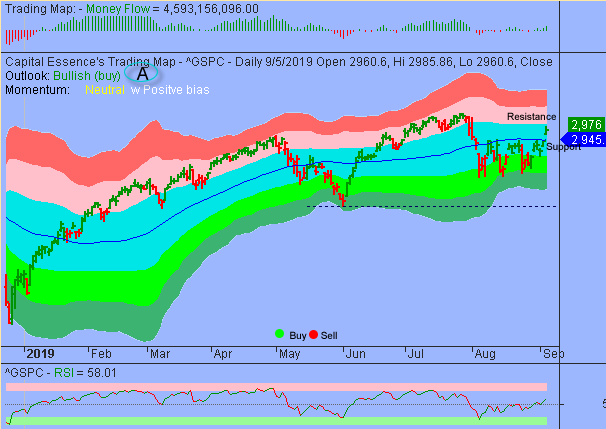 Key technical development in Thursday session was a clear break above the trend channel moving average.  That level was significant when the S&P tested and failed repeatedly in August.  The bullish breakout would be confirmed on another close above 2945, which would support upside follow-through and a test of more important resistance in the 3000-3025 area in the coming weeks.

Market internal has been strengthened but upside momentum does not appeared strong enough to generate widespread breakouts so it should not be surprising to see some backing and fillings in the coming days.

In summary, S&P cleared key resistance, breaking out to multi-week high.  Consecutive close above 2945 would signify a breakout and bullish reversal, supporting upside follow-through in the weeks ahead.  Nonetheless, upside momentum does not appeared strong enough to generate widespread breakouts.  So it should not be surprising to see some backing and fillings prior to new upleg.