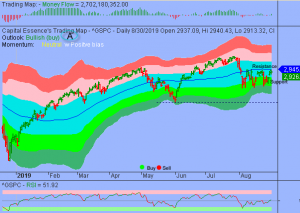 We’ve noted in the previous Market Outlook that: “S&P is at key technical juncture.  Current rally is testing formidable resistance near 2945.  The longer the index stay below that level, the more vulnerable it is to lower prices.”  As anticipated, stocks opened significantly higher Friday that saw the S&P traded as high as 2940 after China’s Foreign Ministry said that U.S. and Chinese negotiators are maintaining “effective communication” as the two countries try to strike a trade deal. The market, however, quickly retreated and wavered between small gains and losses for the rest of the session.  For the day, the S&P ended just above the flatline at 2,926.46.  The Nasdaq Composite slipped 0.1 percent to 7,962.88.  The Dow Jones Industrial Average added 0.1 percent to 26,403.28.  The CBOE Volatility Index (VIX), widely considered the best gauge of fear in the market, rose nearly 6 percent to 18.98.

The major indexes posted their worst monthly performance since May as U.S.-China trade relations intensified in August.  Investors loaded up on traditionally safer assets such as gold and silver. As such, the SPDR Gold Trust (GLD) rose 8 percent in August, bringing its year-to-date gains up to nearly 19 percent, outperformed the S&P.  Now the question is whether the rally has more legs?  Below is an update look at a trade in GLD. 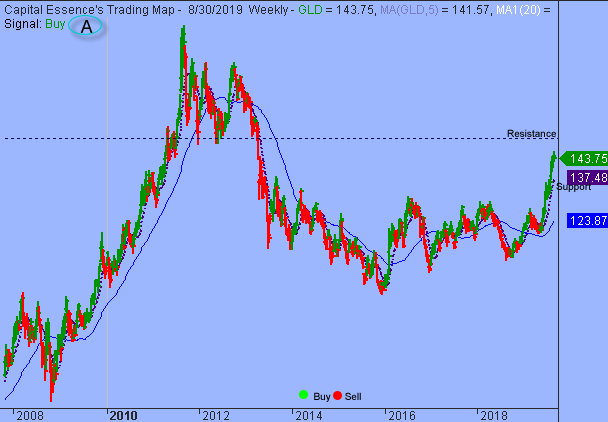 Our “U.S. Market Trading Map” painted GLD bars in green (buy) – see area ‘A’ in the chart. GLD has been on a tear in recent months after the early February correction found support near the 1-year moving average, a key technical level based on moving averages.  This month’s massive rally pushed the ETF toward the formidable resistance near the 150 zone, or the neckline of the massive 2011-2012 double top pattern.  That level was significant when GLD fell below it in 2013.  It’s now acting as strong resistance so it should not be surprising to see some profit taking efforts in the coming days.  Nevertheless, support is strong near the 137-140 zone.  This could help putting a short-term floor under the yellow metal.

GLD has resistance near 150.  Short-term traders could use that level as the logical level to measure risk against. 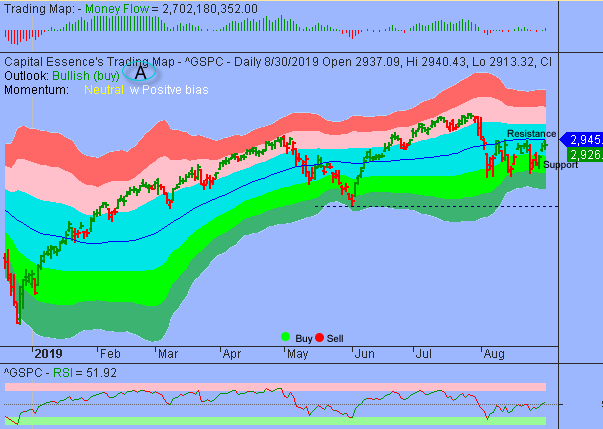 As it was the case of late, Friday’s early rally attempt brought the S&P within five points of the trend channel moving average, around 2945, but the market quickly retreated and wavered between small gains and losses for the rest of the session.  As mentioned, the index is now at a key juncture.  It is testing formidable resistance from below.  Market internal has been strengthened following last week’s advance but upside momentum does not appear strong enough to generate widespread breakouts.  Over the next few days, it will be important to monitor the rally and retreat behaviors as the trend channel moving average is tested.

In summary, while the near-term technical outlook remains bullish, given the looming resistance near S&P’s 2945, there is no big commitment to accumulate stocks aggressively at this point.  What this means is that as the S&P inches into the area of key overhead resistance, aggressive sellers will most likely dips in their toes to see how the market reacts.  So, we’d be cautious against taking large position at this stage.