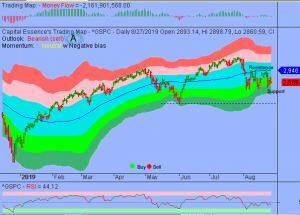 We’ve noted in the previous Market Outlook that: “last week’s selloff pushed the S&P down to formidable support zone.  Momentum and Money Flow measure are not favorable over the near to intermediate term, suggesting this is not a time to be long.”  The major indices gave back most of Monday’s gains as recession indicator from the bond market worsened and fears around the U.S.-China trade war weighed on equity trading.  For the day, the S&P fell 0.32 percent to 2,869.16 while the Nasdaq Composite dropped 0.34 percent to finish at 7,826.95.  The Dow Jones Industrial Average gave up 0.5 percent to finish at 25,777.90.  The CBOE Volatility Index (VIX), widely considered the best gauge of fear in the market, jumped more than 5 percent to 20.31.

The spread between the 10-year Treasury yield and the 2-year rate fell to negative 5 basis points, its lowest level since 2007.  Traders fear it because in the past it has preceded recessionary periods.  The reaction to the persistent flattening/inversion activity in the U.S. Treasury yield curve was made more evident in the S&P financials sector, which led all sectors in losses on Tuesday.  As such, the Financial Select Sector SPDR ETF (XLF) fell 0.6 percent on the day, bringing its year-to-date gains down to about 10 percent, underperformed the S&P.  Now the question is whether recent pullback is a pause that refreshes or it’s a beginning of something worse?  Below is an update look at a trade in XLF. 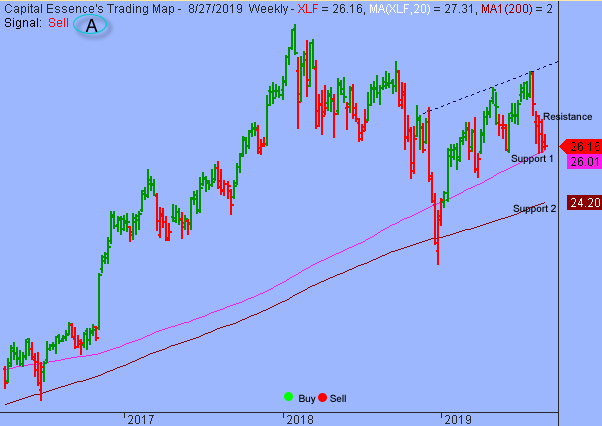 Our “U.S. Market Trading Map” painted XLF bars in red (sell) – see area ‘A’ in the chart. There is a distinct possibility that a bearish flag formation is currently setting up in the weekly chart of XLF, which represents the digestion period in the aftermath of the late 2018 massive selloff.  Over the past few weeks, XLF has been basing sideways using the 2-year moving average, a key technical level based on moving averages, as support after the early June rally attempt ran out of steam near the 6-month rising trend line resistance.  The early August downswing is testing support at the 2-year moving average, near 26.  A sustain break below 26 will push the ETF out of recent trading range and trigger a new sell signal with downside target around 24-25.

XLF has resistance near 27.30.  Short-term traders could use that level as the logical level to measure risk against. 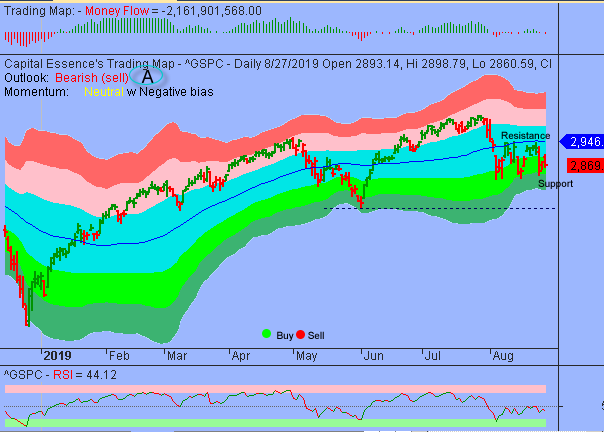 Once again, the S&P retreated after the early rally attempt ran out of steam near the important sentiment 2900 mark. Momentum indicator shifted lower from near oversold zone, indicating an internal weakness.  Perhaps, the negative Money Flow measure is the best illustration of the bear’s case.  There is a high probability that market is in for a ‘range-bound’ trading environment.  Resistance is strong near the trend channel moving average, currently at 2946.  On the downside, support is strong near 2800.  Given the damages down over the past weeks, it makes sense to sell into rallies toward the trend channel moving average.

In summary, there is a high probability that S&P is in for a ‘range-bound’ trading environment.  This is a rally and retreat environment. It is not a trending environment. Short-term traders can anticipate continued volatility with rapid up and down moves in the markets.