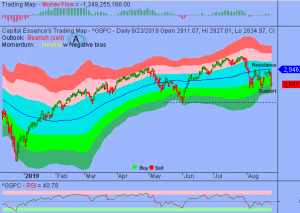 The stock market sold off on Friday after Donald Trump ordered companies to find an alternative to China in response to Beijing announcing retaliatory tariffs against the U.S. The S&P slid 2.6 percent to close at 2,847.11. The Dow Jones Industrial Average fell 2.4percent to close at 25,628.90.  The Nasdaq Composite dropped 3 percent to end the day at 7,751.77.  The CBOE Volatility Index (VIX), widely considered the best gauge of fear in the market, surged more than 19 percent to 19.87.

The critical spread between the 10-year Treasury yield and the 2-year yield inverted multiple times throughout Friday’s trading session after Donald Trump ordered American companies to steer clear of trade with Beijing.  An inversion of the 2-10 yields, which viewed by fixed income traders as a recession prognosticator, put a damper bank lending profits. As such, the SPDR S&P Bank ETF (KBE) tumbled more than 3 percent on the day, bringing its year-to-date gains down to just over 6 percent, underperformed the S&P.  Now the question is whether recent pullback is a pause that refreshes or it’s a beginning of something worse?  Below is an update look at a trade in KBE. 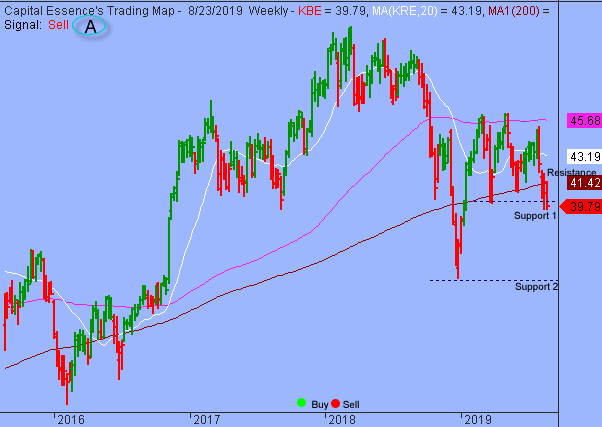 Our “U.S. Market Trading Map” painted KBE bars in red (sell) – see area ‘A’ in the chart. Last week’s downside follow-through confirmed the prior week’s bearish breakout below the 4-year moving average, a key technical level based on moving averages.  This is a negative development, increased the probability for a retst of the late 2018 low just below 35.  A consecutive close below 39.60 will confirm this.

KBE has resistance just above 41.40.  Short-term traders could use that level as the logical level to measure risk against. 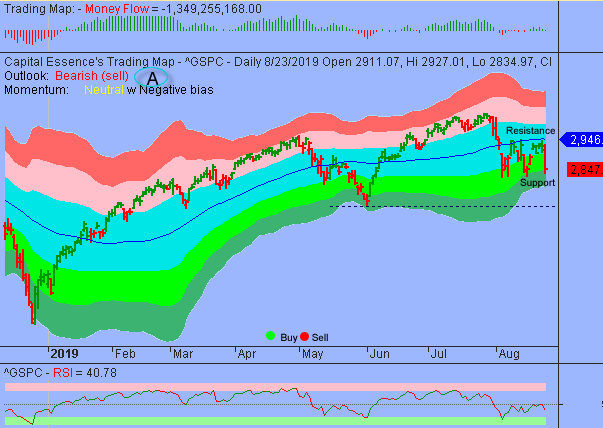 Once again, the S&P retreated after recent rally attempt failed at the trend channel moving average.  Friday’s massive selloff pushed the index down to support at the lower boundary of the green band.  This level was tested several times over the past months.  Technically speaking, the more often support is tested the weaker it becomes.  Adding to concerns is the lagging Money Flow measure.  The indicator whipsaw near zero line as the S&P struggled to get past formidable resistance, suggesting that the bears are more aggressive as prices off than the bulls were as prices ascended.  These elements suggested that the support might not hold for long and the index will have to move to a much lower level to attract new buyers.

The trend channel moving average, currently at 2946, is the line in the sand.  The bulls must hurdle and sustain above that level to maintain upside momentum.  As for support, the important sentiment 2800 mark is the line in the sand. A failure to hold above key support suggested that most of the potential buyers at this level had already placed their bets.  The next batch of buyers typically sits at a much lower level and we’re looking at 2500.

In summary, last week’s selloff pushed the S&P down to formidable support zone.  Momentum and Money Flow measure are not favorable over the near to intermediate term, suggesting this is not a time to be long.