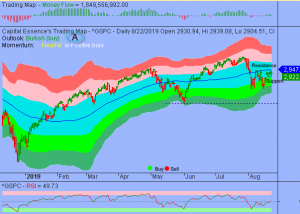 We’ve noted in the previous Market Outlook that: “market is in holding pattern as traders are watching to see whether or not the S&P can hold above 2900.”  As anticipated, market finished mixed on Thursday, as weak U.S. manufacturing data and reservations from a few Fed officials contributed to some indecisiveness. The S&P ended the day just below the flatline at 2,922.95 while the Nasdaq Composite slid 0.4 percent to 7,991.39. The Dow Jones Industrial Average added 0.2 percent to 26,252.24.  The CBOE Volatility Index (VIX), widely considered the best gauge of fear in the market, jumped more than 5 percent to 16.68.

The U.S. manufacturing PMI (purchasing managers’ index) was 49.9 in August, down from 50.4 in July and below the neutral 50.0 threshold for the first time since September 2009, according to IHS Markit, the latest sign that the trade war may be exacerbating the economic slowdown. As such, the Industrial Select Sector SPDR ETF (XLI) closed near the unchanged mark Thursday, but is up more than 16 percent year-to-date, outperformed the S&P.  Now the question is whether recent pullback is a pause that refreshes or it’s a beginning of something worse?  Below is an update look at a trade in XLI. 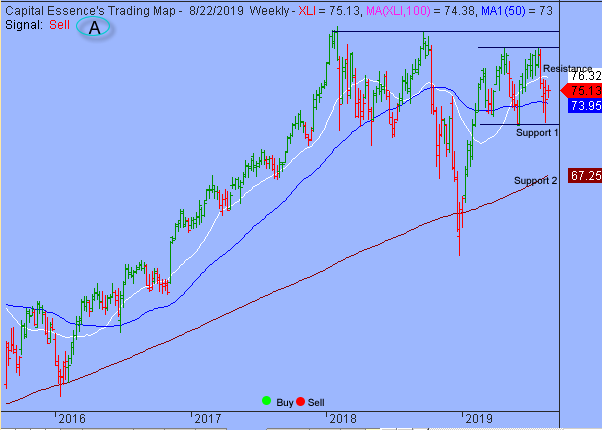 Our “U.S. Market Trading Map” painted XLI bars in red (sell) – see area ‘A’ in the chart. XLI has been basing sideways using the 1-year moving average as support after the early June rally ran into resistance near the prior high set in April.  The early August downswing tested support near the 72 zone.  Last week’s rally attempt however, ran out of steam near the 20week moving average.  This is a short-term negative development, indicating an internal weakness. Over the next few weeks, traders should monitor trading behaviors near 72.  A close below that level has measured move to around 67.

XLI has resistance just above 76.  Short-term traders could use that level as the logical level to measure risk against. 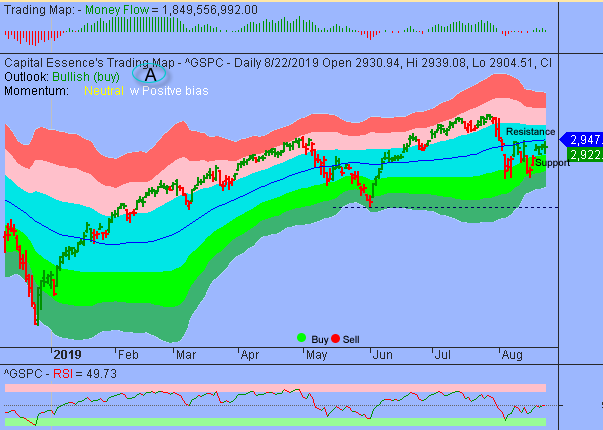 The big picture remains the same.  S&P continues basing sideways using the upper boundary of the green band as support.  Money Flow measure is above the zero line, indicating a positive net demand for stocks.  The fact that buying pressure remains positive as the S&P tested near key price level suggested the market will take another leg higher as soon as it works off excessive optimism.  While more backing and filling would not be a surprise, a close below 2900 would see a massive pickup in volatility.  We’d turn particularly bearish if the index closes twice below that level.

The trend channel moving average, currently at 2947, is the line in the sand.  The bulls must hurdle and sustain above that level to maintain upside momentum.  As mentioned, a close above that level will complete the bullish W-shape bottom and trigger acceleration toward the prior high set in late July.  As for support, the important sentiment 2800 mark is the line in the sand. A failure to hold above key support suggested that most of the potential buyers at this level had already placed their bets.  The next batch of buyers typically sits at a much lower level and we’re looking at 2750.

In summary, the big picture remains the same. There is an orderly pullback consolidation, which represents digestion period.  The fact that the S&P managed to hold on to most of recent gain in the face of overbought conditions, indicating an internal strength.  This increases the probability that the index will break out from current trading range as soon as the market shakes off the excessive bullishness.