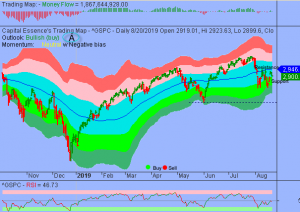 The major indexes fell to their session lows in the final minutes of the trading session as Treasury yields declined as well.  The 2-year yield declined two basis points to 1.51%, and the 10-year yield declined four basis points to 1.56%.  Bank shares such as Citigroup, Bank of America and J.P. Morgan Chase all traded lower as Treasury yields pulled back.  As such, the SPDR S&P Bank ETF (KBE) fell 1.38 percent on the day, bringing its year-to-date gains down to about 9 percent, underperformed the S&P.  Now the question is whether recent pullback is a pause that refreshes or it’s a beginning of something worse?  Below is an update look at a trade in KBE. 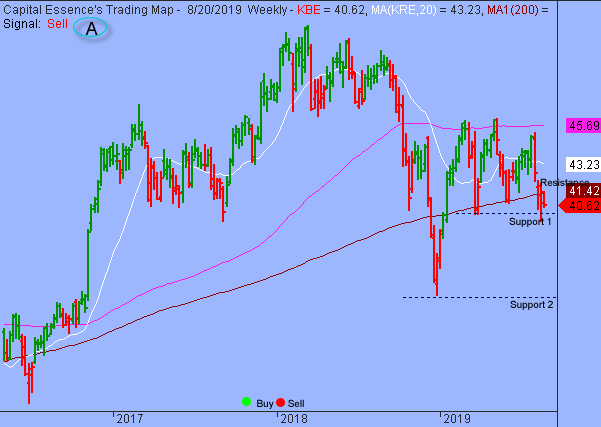 Our “U.S. Market Trading Map” painted KBE bars in red (sell) – see area ‘A’ in the chart.  The first dominant feature on the chart is the falling trend starting in September 2018.  The second dominant feature of the chart is the sideways trading range between the 2-year and 4-year moving averages since early 2019, which represents the digestion period.  The early August selloff pushed the ETF below the 4-year moving average, a key technical level, signify a bearish breakout and downside reversal.  Right now, follow-through is the key.  Over the next few days, traders should monitor trading behavior as the 39.60 zone.  A close below that level will confirm the bearish signal and a retest of the late 2018 low, just below 35, should be expected.

KBE has resistance near 41.50.  Short-term traders could use that level as the logical level to measure risk against. 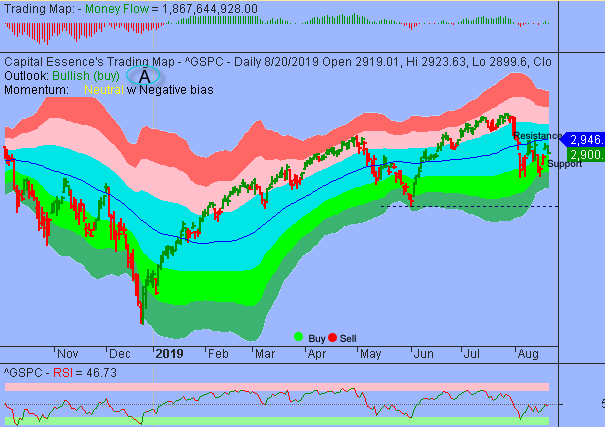 Once again, S&P retreated after last week’s rally attempt ran out of steam just below the trend channel moving average. Tuesday’s selloff is testing support at the important sentiment 2900 mark.  That level roughly corresponds with the upper boundary of the green band.  Momentum indicator shifted lower from near oversold zone, indicating an internal weakness.  Money Flow measure hovers near the zero line, indicating a lack of commitment.  These elements will negatively affect trading sentiment in the coming days.

The trend channel moving average, currently at 2946, is the line in the sand.  As mentioned, a close above that level will complete the bullish W-shape bottom and trigger acceleration toward the prior high set in late July.  With that said, the bulls must hurdle and sustain above that level to maintain upside momentum.  As for support, the important sentiment 2800 mark is the line in the sand. A failure to hold above key support suggested that most of the potential buyers at this level had already placed their bets.  The next batch of buyers typically sits at a much lower level and we’re looking at 2750.

In summary, recent trading actions leaving the S&P in what looks to us like an orderly high level consolidation of last week’s massive rally.  The overall technical backdrop remains positive, suggesting that selloff will likely be shallow and quick because sideline money will try to fight its way back into the market.  As for strategy, traders should consider buying into market dips.