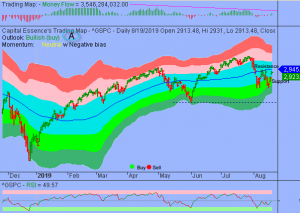 We’ve noted in the previous Market Outlook that: “S&P is in a midst of a short-term oversold relief bounce.”  As anticipated, stocks rallied on Friday as a rebound in bond yields eased fears of a recession that sent stocks tumbling earlier in the week.  For the day, the S&P rose 1.2 percent to close at 2,923.65 on Monday in a broad-based advance that extended its rebound rally to a third day.  The Dow Jones Industrial Average added 1 percent to 26,135.79.  The Nasdaq Composite advanced 1.4 percent to end the day at 8,002.81.  The CBOE Volatility Index (VIX), widely considered the best gauge of fear in the market, fell more than 8 percent to 16.93.

Gold prices fell more than 1 percent on Monday as concerns eased that major economies could tip into recession, boosting investors’ affinity for risk and detracted from bullion’s safe-haven allure.  Spot gold was down 1 percent at $1,498.35 per ounce, while U.S. gold futures fell 0.97 percent to $1,508.7.  As such, the VanEck Vectors Gold Miners ETF (GDX) fell 1.24 percent on the day, bringing its year-to-date gains down to more than 32 percent, outperformed the S&P.  Now the question is whether recent pullback is a pause that refreshes or it’s a beginning of something worse?  Below is an update look at a trade in GDX. 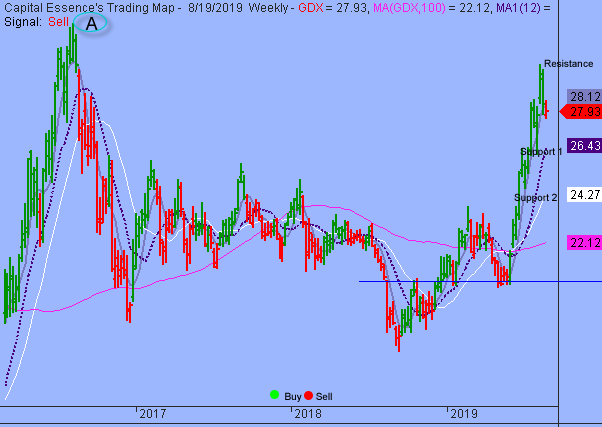 Our “U.S. Market Trading Map” painted GDX bars in red (sell) – see area ‘A’ in the chart.  GDX has been on a tear in recent weeks after the late March correction found support near the late 2018 breakout point.  The late May rally found resistance near the prior high set in August 2016.  Monday’s selloff pushed the ETF below support near the 28 zone, signify a bearish breakout and downside reversal.  This is a negative development, increased the probability for a test of support near the 26.50 zone.  A close below that level has measured move to around 24.30.

GDX has resistance near 30.  Short-term traders could use that level as the logical level to measure risk against. 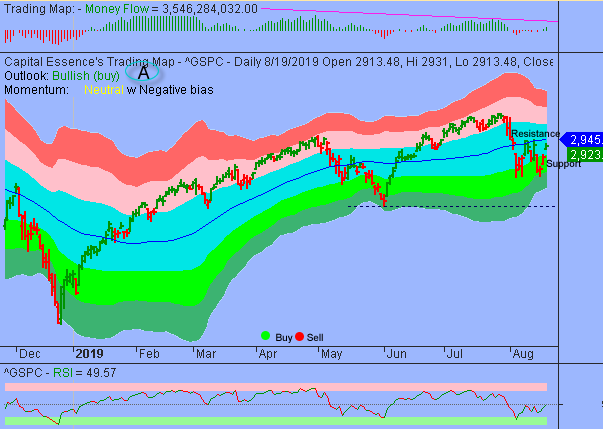 As expected, S&P is heading toward the trend channel moving average after recent pullback to support at the lower boundary of the green band was met with a new wave of buying interest. Money Flow measured trended higher from above the zero line, indicating an increase in buying pressure.  Momentum indicator shifted higher from near oversold zone, allowing additional upside probing.  These elements increased the probability for a retest of resistance at the trend channel moving average, currently at 29455.  This level is significant in charting terms.  It was tested several times over the past weeks.  A close above that level will complete the bullish W-shape bottom and trigger acceleration toward the prior high set in late July.

For now, the trend channel moving average, currently at 2945, represents key resistance.  We’d turn particular positive if the index closes twice above that level.  As for support, the important sentiment 2800 mark is the line in the sand. A failure to hold above key support suggested that most of the potential buyers at this level had already placed their bets.  The next batch of buyers typically sits at a much lower level and we’re looking at 2750.

In summary, S&P tested and held support at the green band, or oversold zone.  Our near-term work on price structure and momentum suggested that the index is in a reflexive bounce.  Traders will be looking for the index to close above the trend channel moving average before getting aggressively long again.