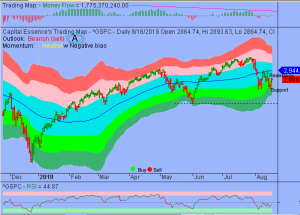 We’ve noted in the previous Market Outlook that: “our near-term work on momentum and price structure suggested that an important near-term low had been established and the S&P is in an early stage of a snap back bounce.  We believe the relief rally can be sustained for a few days, potentially allowing for a test of 2880 before a significant pullback unfolds.”  As anticipated, stocks rallied on Friday as a rebound in bond yields eased fears of a recession that sent stocks tumbling earlier in the week.  For the day, the S&P gained 1.4 percent to 2,888.68 and the Nasdaq Composite rose 1.7 percent to 7,895.99.   The Dow Jones Industrial Average added 1.2 percent to 25,886.01.  The CBOE Volatility Index (VIX), widely considered the best gauge of fear in the market, soared more than 26 percent to 22.10.

Chip makers attracted strong buying support Friday, boosted by a positive reaction to better-than-expected earnings results from NVIDIA (NVDA).  As such, the iShares PHLX Semiconductor ETF (SOXX) jumped 2.66 percent on the day, bringing its year-to-date gains up to more than 28 percent, outperformed the S&P.  Now the question is whether the rally has more legs?  Below is an update look at a trade in SOXX.

Our “U.S. Market Trading Map” painted SOXX bars in red (sell) – see area ‘A’ in the chart.  Over the past few weeks, SOXX has been trending lower is a short-term corrective mode after the early June rally ran out of steam just above the prior high set in late April 2019.  The correction is testing support at the late 2018 rising trend line.  This level was tested several times over the past months.  Technically speaking, the more often support is tested the weaker it becomes.  Over the next few days, it’d more important to monitor trading behavior near 192.  A close below that level on a weekly basis has measured move to around 181.

SOXX has resistance near 205.35.  Short-term traders could use that level as the logical level to measure risk against. 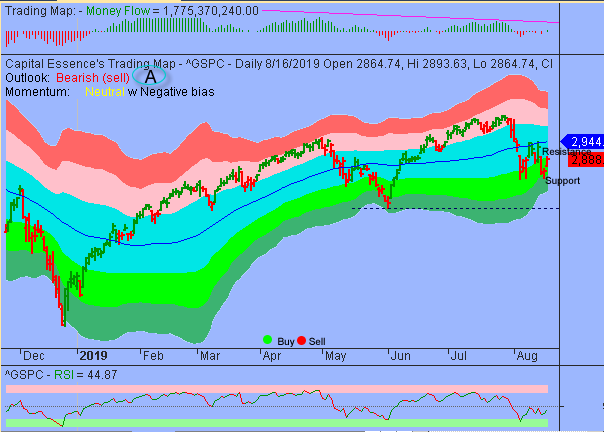 As expected, S&P rebounded nicely off support at the lower boundary of the green band, or oversold zone.  Friday’s upside follow-through confirmed Thursday’s bullish reversal signal.  Market internal has been strengthened following recent advance but upside momentum does not appeared strong enough to generate widespread breakouts.  With this in mind, we’d look to reduce exposure into this short-term relief bounce, which might take the S&P closer to 2944 before a significant pullback unfolds.

The trend channel moving average, currently at 2944, represents key resistance.  We’d turn particular positive if the index closes twice above that level.  As for support, the important sentiment 2800 mark is the line in the sand. A failure to hold above key support suggested that most of the potential buyers at this level had already placed their bets.  The next batch of buyers typically sits at a much lower level and we’re looking at 2750.

In summary, S&P is in a midst of a short-term oversold relief bounce.  Nonetheless, upside momentum does not appeared strong enough to generate widespread breakouts. What the bulls want to see is S&P stabilizes and climbs above the trend channel moving average.  The longer the index stays below that level, the more vulnerable it is to lower prices.