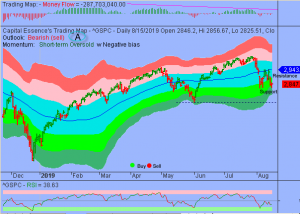 We’ve noted in the previous Market Outlook that: “Wednesday’s massive selloff signify resumption of the late July’s downswing. As the S&P approaches critical tipping point, we’re looking for the next major sell signal.  The index could signal an extended downward trajectory, depending on how it closes over the next few days.   If the market is going to find a bottom in the near term, we want to see the S&P rebounds off 2800.”  As anticipated, the S&P fell to a session low of 2825 shortly after the opening as 10-year Treasury rate dipped below 1.5 percent, the lowest level in three years.  The bench mark gauge however, managed to overcome the early weakness and closed slightly higher, up 0.25 percent to 2,847.6, while the Nasdaq Composite was slightly lower at 7,766.62. The Dow Jones Industrial Average ended the volatile session 0.39 percent higher to 25,579.39.  The CBOE Volatility Index (VIX), widely considered the best gauge of fear in the market, soared more than 26 percent to 22.10.

Retail sales rose solidly in July and beat expectations, the Commerce Department said Thursday. Consumers spent more at stores and restaurants last month, a sign that fears of a global slowdown that have roiled financial markets haven’t soured consumer optimism.  Nevertheless, the SPDR S&P Retail ETF (XRT) fell 1.59 percent, down nearly 8 percent year-to-date, underperformed the S&P.  Now the question is whether this week’s selloff is a beginning of an end or there’re more pains ahead?  Below is an update look at a trade in XRT. 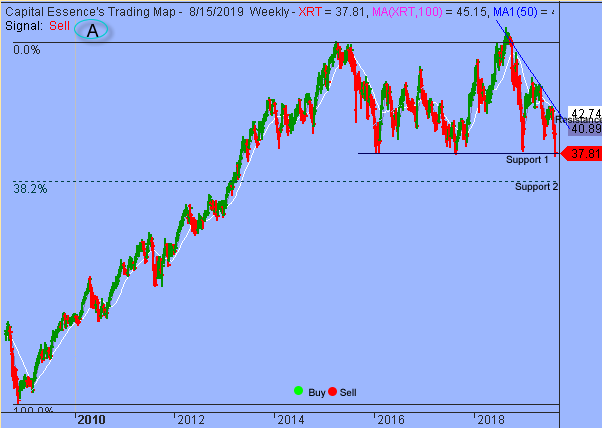 Our “U.S. Market Trading Map” painted XRT bars in red (sell) – see area ‘A’ in the chart.  Over the past few weeks, XRT has been trending sharply lower after the early June rally ran out of steam near the 2018 falling trend line.  This week’s selloff pushed the ETF down to the closely watch 37.80 zone. This level was tested several times over the past years.  A close below it on a weekly basis has measured move to around 34.40, or the 38.2% Fibonacci retracement of the 2008 major upswing.

XRT has resistance near 41.  Short-term traders could use that level as the logical level to measure risk against. 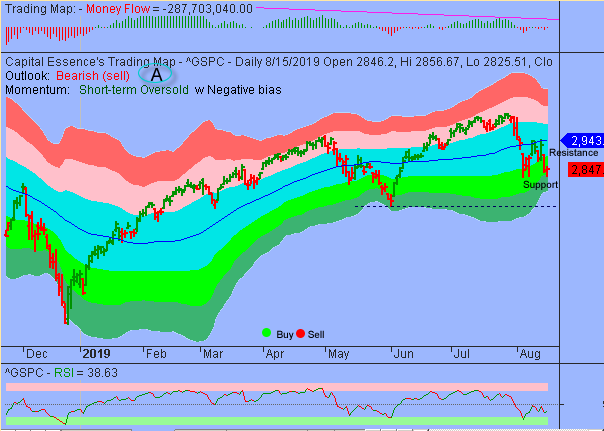 The S&P trades in broad trading bands that define the trend behavior. The July downswing was very rapid with some short-term consolidation near each of the significant support or resistance levels. These support and resistance levels also define the limits and barriers to any future retreat and rebound development.

As expected, S&P moved down to test support at the prior low set in early August after recent rally attempt ran out of steam near the trend channel moving average.  In accordance to the Japanese candlestick pattern recognition, Thursday’s narrow range (or neutral) bar indicates uncertainty – traders refuse to press hard one way or the other just because they are not very sure about the near-term direction.  This explains why market often uses neutral bar to change direction.  Market internal has been deteriorated but downside momentum does not appeared strong enough to generate widespread breakouts.  These elements suggested further backing and fillings likely.

The trend channel moving average, currently at 2943, represents key resistance.  We’d turn particular positive if the index closes twice above that level.  As for support, the important sentiment 2800 mark is the line in the sand. A failure to hold above key support suggested that most of the potential buyers at this level had already placed their bets.  The next batch of buyers typically sits at a much lower level and we’re looking at 2750.

In summary, our near-term work on momentum and price structure suggested that an important near-term low had been established and the S&P is in an early stage of a snap back bounce.  We believe the relief rally can be sustained for a few days, potentially allowing for a test of 2880 before a significant pullback unfolds.