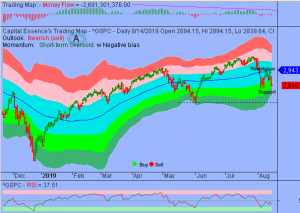 Stocks tumbled out of gate Wednesday that saw the major indices lost around 3 percent amid weak global data and a recessionary signal in the U.S. Treasury market.  The yield on the 10-year note fell below the yield on the 2-year note for the first time since 2007, representing an inversion that has preceded each recession since 1980. The average length of time between the first inversion and the start of each recession since 1980 has averaged 18 months, with the range being as little as ten months to as many as two years.

Bank stocks led the declines as it gets tougher for the group to make a profit lending money in such an environment.  The S&P Financials Sector dipped into correction territory, down more than 10% from a recent high, as industry leaders like Morgan Stanley, Goldman Sachs and Wells Fargo fell further into bear markets.  As such, the Financial Select Sector SPDR ETF (XLF) tumbled 3.7 percent on the day, bringing its year-to-date gain down to just above 9 percent, underperformed the S&P.  Now the question is whether Wednesday’s selloff is a pause that refreshes or it’s a beginning of something worse?  Below is an update look at a trade in XLF. 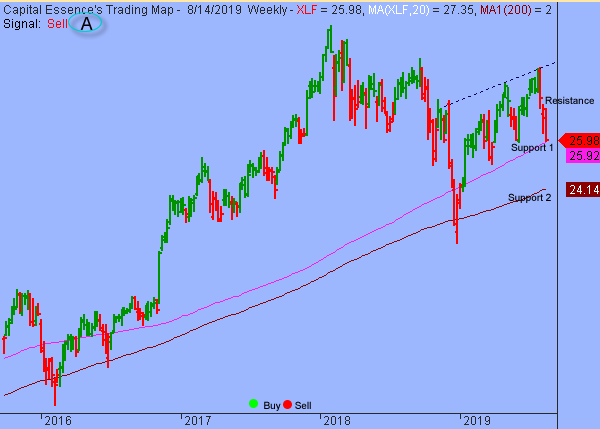 Our “U.S. Market Trading Map” painted XLF bars in red (sell) – see area ‘A’ in the chart.  Over the past few weeks, XLF has been trending sharply lower after the early June rally ran out of steam near upper boundary of its December rising channel.  The correction is testing support at the 2-year moving average, a key technical level based on moving averages.  This level was tested several times over the past months.  A close below 25.90 on a weekly basis has measured move to around 24, or the 4-year moving average.

XLF has resistance near 27.40.  Short-term traders could use that level as the logical level to measure risk against. 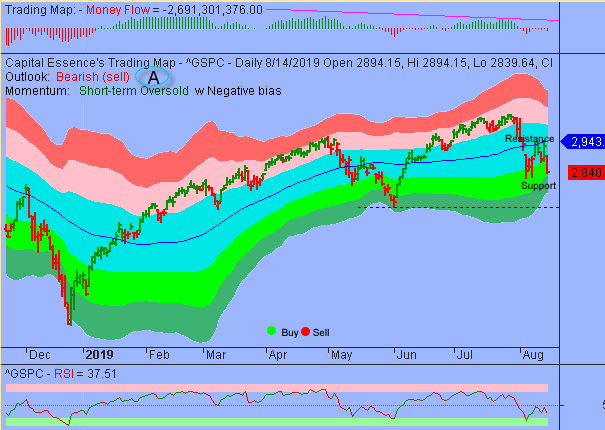 Once again, S&P sold off after Tuesday’s rally attempt ran into resistance at the trend channel moving average. This level was significant when the S&P fell below it in early August.  As mentioned, current trading pattern is similar to that of the mid-May, in which the market bounced a little bit after an initial selloff found minor support near the upper boundary of the green band and then rolled to lower low.  Over the next few days, it’d be important to monitor trading behavior as the green band is tested as support.  A close below that level often marked short-term market bottom.

The trend channel moving average, currently at 2942, represents key resistance.  We’d turn particular positive if the index closes twice above that level.  As for support, the important sentiment 2800 mark is the line in the sand. A failure to hold above key support suggested that most of the potential buyers at this level had already placed their bets.  The next batch of buyers typically sits at a much lower level and we’re looking at 2750.

In summary, Wednesday’s massive selloff signify resumption of the late July’s downswing. As the S&P approaches critical tipping point, we’re looking for the next major sell signal.  The index could signal an extended downward trajectory, depending on how it closes over the next few days.   If the market is going to find a bottom in the near term, we want to see the S&P rebounds off 2800.