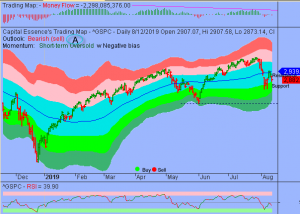 The stock market fell more than 1 percent on Monday, as uncertainties about the global economy continued to push investors away from risk assets and into safe-haven assets like U.S. Treasuries and gold. The S&P fell 1.2 percent to 2,882.44.  The Nasdaq Composite is down 1.2 percent to 7,863.41.  Dow Jones Industrial Average fell 1.49 percent to 25,896.44.  The CBOE Volatility Index (VIX), widely considered the best gauge of fear in the market, surged more than 17 percent to 21.09.

The spread between the 2-year and 10-year yields narrowed to six basis points, as demand for longer-dated tenors continued to climb amid growth concerns. The 2-year yield fell five basis points to 1.58 percent, and the 10-year yield fell ten basis points to 1.64 percent.  This compression in yields not only hit investor sentiment but was also affected the S&P financials sector, which led all 11 S&P sectors in losses. Banks typically rely on healthy net interest margins to boost profit and facilitate lending activity.  As such, the Financial Select Sector SPDR ETF (XLF) tumbled 1.91 percent on the day, bringing its year-to-date gain down to about 12 percent, underperformed the S&P.  Now the question is whether recent pullback is a pause that refreshes or it’s a beginning of something worse?  Below is an update look at a trade in XLF. 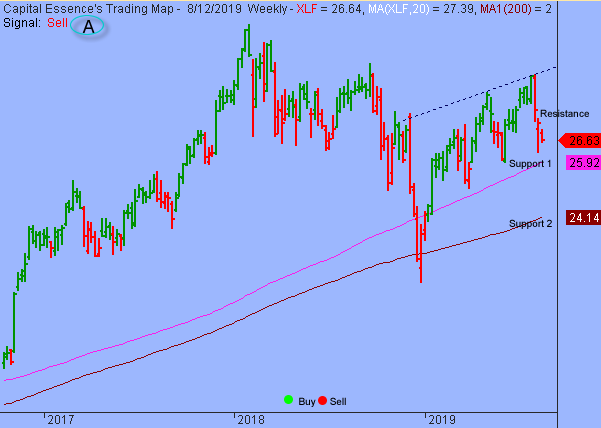 Our “U.S. Market Trading Map” painted XLF bars in red (sell) – see area ‘A’ in the chart.  Over the past few weeks, XLF has been trending lower in a short-term corrective mode after the early June rally ran out of steam near the November rising trend line.  The correction is testing support at the 2-year moving average, a key technical level based on moving averages, around 26.  This level has been tested several times over the past months.  A close below it has measured move to around 24.

XLF has resistance near 27.60.  Short-term traders could use that level as the logical level to measure risk against. 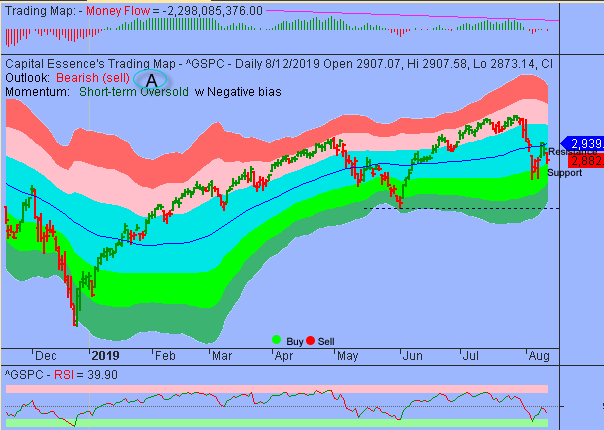 As expected, S&P retreated after recent rally attempt ran into resistance at the trend channel moving average.  This level was significant when the S&P fell below it in early August. In fact, current trading pattern is similar to that of the mid-May, in which the market bounced a little bit after an initial selloff found minor support near the upper boundary of the green band and then rolled to lower low.

Momentum indicator trended lower from near oversold zone, indicating an internal weakness.  Money Flow measure hovers just below the zero line, indicating a negative net demand for stocks.  These elements increased the likelihood of further weakness in the days ahead.

The trend channel moving average, currently at 2939, represents key resistance.  We’d turn particular positive if the index closes twice above that level.  As for support, the important sentiment 2800 mark is the line in the sand. A failure to hold above key support suggested that most of the potential buyers at this level had already placed their bets.  The next batch of buyers typically sits at a much lower level and we’re looking at 2750.

In summary, market internal deteriorated as S&P struggled to get pass the trend channel moving average.  Monday’s weakness had improved the posture of our short-to-intermediate indicators, which remain supportive of a pullback.   The longer the index stays below 2939, the more vulnerable it is to lower prices.