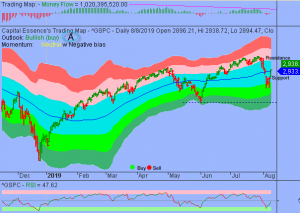 We’ve noted in the previous Market Outlook that: “our near-term work on price structure and momentum suggested that the S&P is in a midst of an oversold consolidation, which represents the digestion period in the aftermath of last week’s massive selloff.  Over the next few days, we will look for trading behaviors as the S&P probes key technical resistance near 2930.”  As anticipated, stock traded sharply higher Thursday after China fixed its onshore currency at the weakest level since 2008 but slightly higher than feared.  The S&P rose 1.9 percent to 2,938.09 while the Nasdaq Composite surged 2.2 percent to 8,039.16.  The Dow Jones Industrial Average added 1.4 percent to 26,378.19. The CBOE Volatility Index (VIX), widely considered the best gauge of fear in the market, fell more than 13 percent to 16.94.

Advanced Micro Devices (AMD) led the Philadelphia Semiconductor Index higher after it unveiled its well-received server CPUs that Google and Twitter will reportedly use.  As such, the iShares PHLX Semiconductor ETF (SOXX) surged 2.77 percent on the day, bringing its year-to-date gain up to over 29 percent, outperformed the S&P.  Now the question is whether the rally has more legs?  Below is an update look at a trade in SOXX.

Our “U.S. Market Trading Map” painted SOXX bars in red (sell) – see area ‘A’ in the chart.  Over the past few weeks, SOXX has been trending lower in a short-term corrective mode after the early June rally ran out of steam just above the prior high set in early 2019.  The correction tested support at the late 2018 rising trend line.  Thursday’s aggressive buying pressure pushed the ETF above the closely watch 198.50 mark. Right now follow-through is the key a close above 107 on a weekly basis will turn the short-term trend up and bring the 220-230 back into view.

SOXX has support near 192.  Short-term traders could use that level as the logical level to measure risk against. 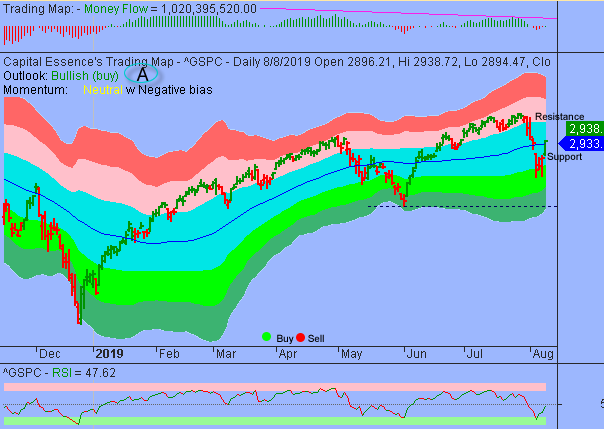 As expected, S&P climbed up to test resistance at the trend channel moving average after recent selloff attempt found support near the important sentiment 2800 mark. That level roughly corresponds with Monday’s bearish breakaway gap.  Technically speaking, while the gap testing process was normal, upside momentum does not appeared strong enough to generate a decisive breakout. So it should not be surprising to see some backings and fillings in the coming days.

For now, the important sentiment 2800 mark is the line in the sand. A failure to hold above key support suggested that most of the potential buyers at this level had already placed their bets.  The next batch of buyers typically sits at a much lower level and we’re looking at 2700.

In summary, S&P climbed above key resistance in a reflection of an improved short-term momentum.  Nevertheless, given the damages done over the past few days, some backings and fillings should be expected.