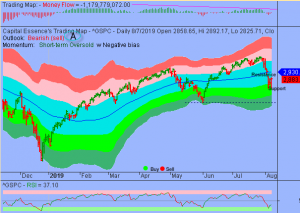 We’ve noted in the previous Market Outlook that: “our near-term work on price structure and momentum suggested that the S&P is in an early stage of a short-term oversold bounce.”  As anticipated, stocks staged a big reversal on Wednesday in which the S&P closed slightly higher, up 0.1 percent to 2,883.98, after being down as much as 2 percent shortly after the open.  The Dow Jones Industrial Average also added 0.1 percent to 26,007.07.  The Nasdaq Composite advanced 0.4 percent to 7,862.83.  The CBOE Volatility Index (VIX), widely considered the best gauge of fear in the market, fell 18 percent to 20.17.

Oil prices tumbled more than 4% on Wednesday to a seven-month low, extending recent heavy losses following a surprise build in U.S. crude stockpiles and fears that demand will shrink due to Washington’s escalating trade war with Beijing.  As such, the Energy Select Sector SPDR ETF (XLE) fell 0.75 percent on the day, bringing its year-to-date gain down to just over 1 percent, underperformed the S&P.  Now the question is whether recent selloff is a beginning of an end or there’re more pains ahead?  Below is an update look at a trade in XLE. 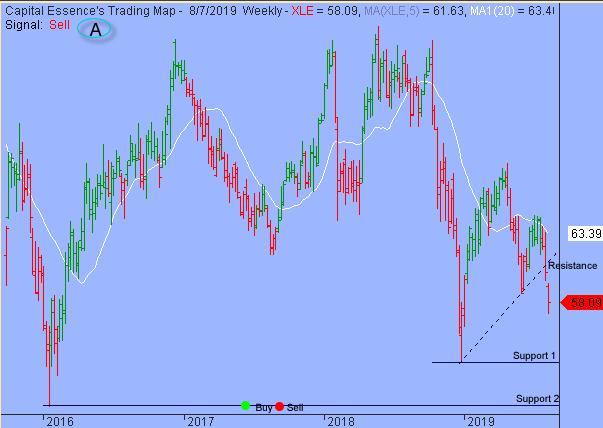 Our “U.S. Market Trading Map” painted XLE bars in red (sell) – see area ‘A’ in the chart.  Over the past few weeks, XLE has been trending lower after the early June rally attempt failed near the 20-week moving average, a key technical level based on moving averages.  This week’s downside follow-through confirmed last week’s bearish break below the late 2018 rising trend line.  This is a negative development, increased the probability for a retest of the late December 2018 low, just above 53.  A close below that level has measured move to around 50, or the early 2016 low.

XLE has resistance near 61.60.  Short-term traders could use that level as the logical level to measure risk against. 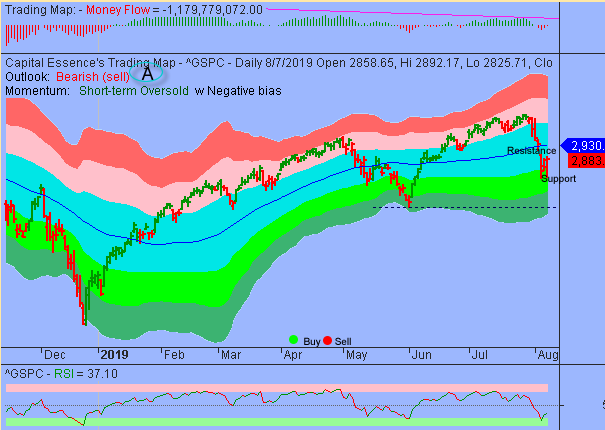 Once again, S&P rebounded nicely after the early selloff attempt found support near the important sentiment 2800 mark. Momentum indicator trended higher from near oversold zone, suggesting market is undergoing some kind of a short-term oversold relief rally.  Nevertheless, the lagging Money Flow measure suggested the rally is merely a counter-trend move and the index might have to move to a much lower level to attract new buyers, the way we had in May.  If the market is going to find a bottom in the near term, we want to see the S&P climbs above the trend channel moving average, currently at 2930.

For now, the important sentiment 2800 mark is the line in the sand. A failure to hold above key support suggested that most of the potential buyers at this level had already placed their bets.  The next batch of buyers typically sits at a much lower level and we’re looking at 2700.

In summary, our near-term work on price structure and momentum suggested that the S&P is in a midst of an oversold consolidation, which represents the digestion period in the aftermath of last week’s massive selloff.  Over the next few days, we will look for trading behaviors as the S&P probes key technical resistance near 2930.  There is no reason to turn particular bullish until this zone is eclipsed.