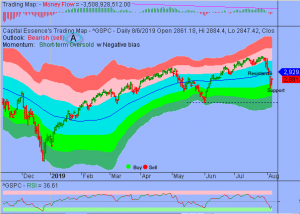 We’ve noted in the previous Market Outlook that: “oversold conditions have returned on an intraday basis so a bounce cannot be ruled out this week.”  As anticipated, stocks rebounded on Tuesday from their worst day of the year after China’s central bank indicated it plans to keep its currency at a level stronger than some investors had first feared, easing tensions about the nation using the yuan as a weapon in the trade war.  The Dow Jones Industrial Average rose 1.2 percent to close at 26,029.52. The S&P rose 1.3 percent to 2,881.77, while the Nasdaq Composite climbed nearly 1.4 percent to 7,833.27.  The CBOE Volatility Index (VIX), widely considered the best gauge of fear in the market, fell 18 percent to 20.17.

Nine of the 11 S&P sectors finished higher by at least 1 percent. The information technology, financials, and industrials sectors led the advance, while the energy was the lone holdout as oil prices continued to decline.  As such, the SPDR S&P Bank ETF (KBE) rose nearly 1 percent on the day, bringing its year-to-date gain up to about 12, slightly underperformed the S&P.  Now the question is whether the rally has more legs?  Below is an update look at a trade in KBE. 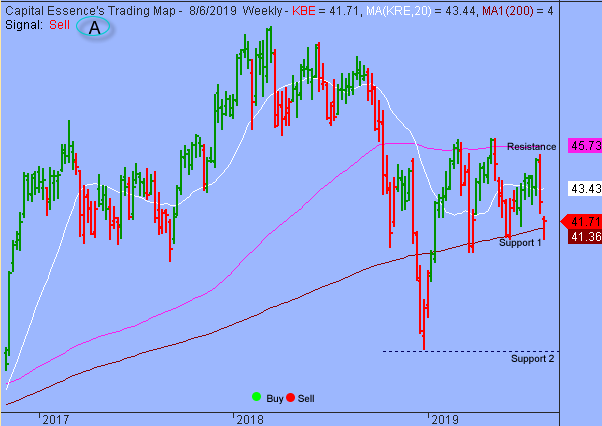 Our “U.S. Market Trading Map” painted KBE bars in red (sell) – see area ‘A’ in the chart.  The first dominant feature on the chart is the falling trend starting in late 2018.  The second dominant feature of the chart is the sideways trading range between the 2-year and 4-year moving averages since early 2019, which represents the digestion period. The early August selloff is testing support at the 42 zone. This level has been tested several times over the past months.  Technically speaking, the more often support is tested the weaker it becomes.  A failure to hold above it will bring the late 2018 low, around 36, into view.

KBE has resistance just below 46.  Short-term traders could use that level as the logical level to measure risk against. 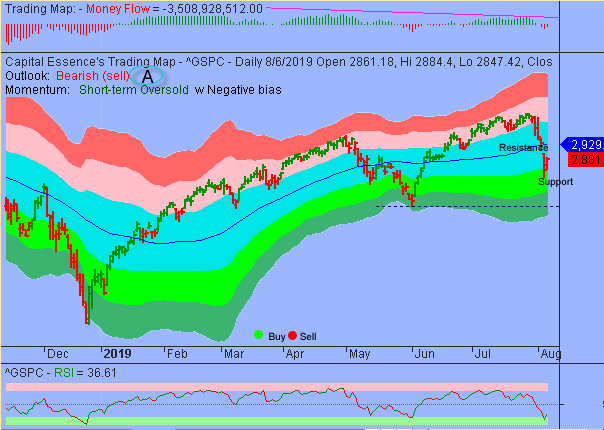 S&P bounced off support at the upper boundary of the green band. Momentum indicator shifted higher from near oversold zone, suggesting market is due for some kind of a short-term oversold relief rally the way we had in May.  The most important level to watch is the trend channel moving average, currently at 2929.  Some aggressive sellers might use that level like a magnet to sell against, the way we’ve had in May.

For now, the important sentiment 2800 mark is the line in the sand. A failure to hold above key support suggested that most of the potential buyers at this level had already placed their bets.  The next batch of buyers typically sits at a much lower level and we’re looking at 2500.

In summary, our near-term work on price structure and momentum suggested that the S&P is in an early stage of a short-term oversold bounce. The index has 2929 to trade against. As the index inches into the area of key overhead resistance, aggressive sellers will most likely dips in their toes to see how the market reacts.  So, we’d be cautious against taking large position at this stage.