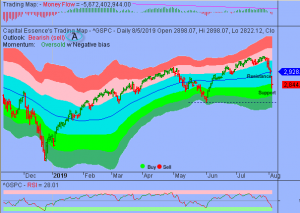 Stocks fell sharply Monday as a trade war between the world’s largest economies intensified with China retaliating against Donald Trump’s latest move. The Dow Jones Industrial Average plunged 2.9 percent to close at 25,717.74. The S&P dropped nearly 3 percent to 2,844.74. The Nasdaq Composite lagged, falling 3.5 percent to 7,726.04.  The CBOE Volatility Index (VIX), widely considered the best gauge of fear in the market, surged nearly 40 to 24.59.

As U.S. stocks suffered their steepest drop of 2019, Big Tech was hit particularly hard.  Microsoft, Apple, Amazon, Alphabet and Facebook — the five most valuable U.S. companies — lost a combined $162 billion on Monday, leading the broader market route, which was sparked by concerns of a trade war with China.  As such, the Technology Select Sector SPDR ETF (XLK) tumbled 4.17 percent on the day, bringing its year-to-date gain down to just over 22 percent, outperformed the S&P.  Now the question is whether recent selloff is a pause that refreshes or it’s a beginning of something worse?  Below is an update look at a trade in XLK. 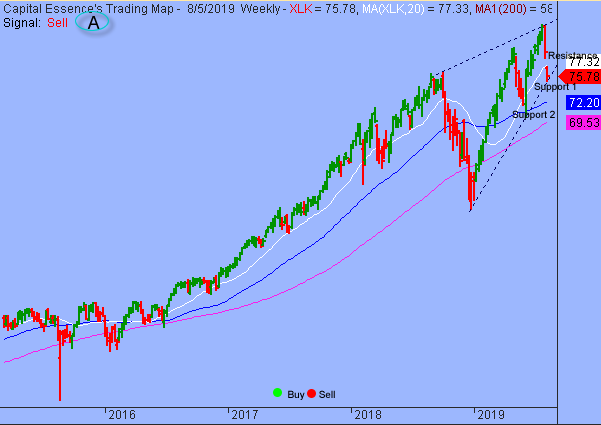 Our “U.S. Market Trading Map” painted XLK bars in red (sell) – see area ‘A’ in the chart.  Over the past few weeks, XLK has been trending lower in a short-term corrective mode after the early June rally ran into resistance at the upper boundary of the multi-month rising wedge.  This week’s selloff pushed the ETF below the closely watch 77 zone and down to the late 2018 rising trend line support, near the 75 area.  This level is significant in charting terms.  A close below it on a weekly basis has measured move to around 72-70.

XLK has resistance just above 77.  Short-term traders could use that level as the logical level to measure risk against. 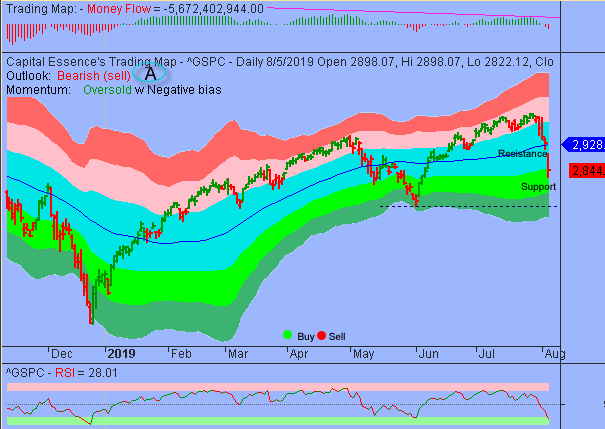 Key technical development in Monday trading session was a clear break below the trend channel moving average.  This level was significant when the index climbed above it in early June.  Market internal deteriorated as selling pressure accelerated but Monday’s selloff pushed the index below the lower boundary of the green band, or oversold zone. Market often marked significant near-term bottom almost every time it fell below this level.

For now, the important sentiment 2800 mark is the line in the sand. A failure to hold above key support suggested that most of the potential buyers at this level had already placed their bets.  The next batch of buyers typically sits at a much lower level and we’re looking at 2500.

In summary, oversold conditions have returned on an intraday basis so a bounce cannot be ruled out this week.  However, short-term momentum remains weak, and more climactic selling is needed to bring market internal measures to oversold extremes, therein signaling a tradable low.  With this in mind, we’d look to reduce exposure into intraday rallies.