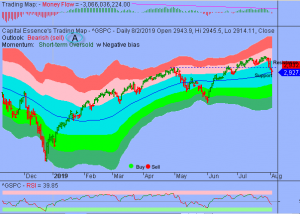 We’ve noted in the previous Market Outlook that: “S&P broke several supports Thursday.  Market internal has weakened but the 2900 zone is too big and too important to fall quickly.  This could help minimize downside follow-through and widespread breakdowns.”  As expected, stocks sold off sharply in early Friday session that saw the S&P traded as low as 2914 before buy-the-dipper stepped in.  For the day, the bench mark gauge fell 0.7 percent to end the day at 2,932.05. The Nasdaq Composite slid 1.3 percent to close at 8,004.07.  The Dow Jones Industrial Average gave up 0.4 percent to 26,485.01.  The CBOE Volatility Index (VIX), widely considered the best gauge of fear in the market, closed flat near 17.61.

Stocks fell on Friday as China promised retaliatory measures against the U.S. if President Trump follows through on his tariff threat.  Caterpillar and Deere, two stocks associated with trade because of their overseas revenue exposure, both fell more than 1.5 percent. As such, the Industrial Select Sector SPDR ETF (XLI) fell 0.64 percent on the day, bringing its year-to-date gain down to about 18 percent, slightly outperformed the S&P.  Now the question is whether recent selloff is a pause that refreshes or it’s a beginning of something worse?  Below is an update look at a trade in XLI. 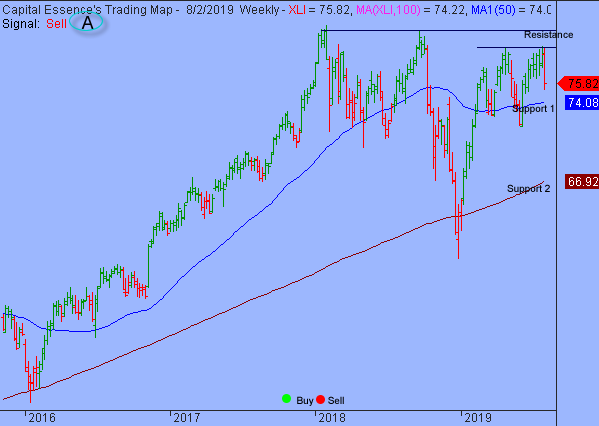 Our “U.S. Market Trading Map” painted XLI bars in red (sell) – see area ‘A’ in the chart.  XLI has been trending higher over the past weeks after the May correction found support near the 1-year week moving average, a key technical level based on moving averages.  The rally tested resistance at the prior high set in late April.  Last week’s massive selloff is a clear indication of supply overwhelming demand.  This is a negative development, increased the probability for a retest of support near the 74 zone.  This level is significant in charting terms.  A close below that level on a weekly basis has measured move to around 67.

XLI has resistance near 79.  Short-term traders could use that level as the logical level to measure risk against. 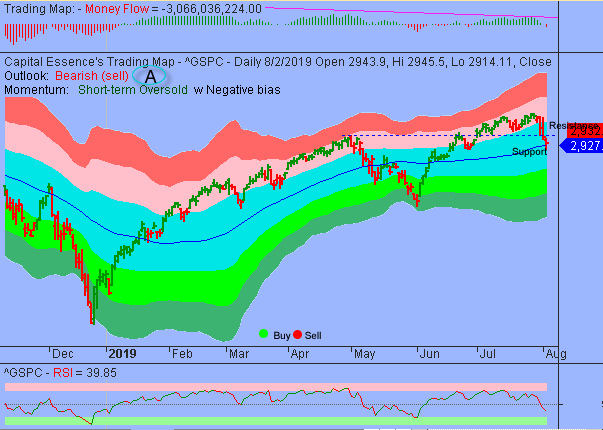 As expected, the S&P moved down to test support at the trend channel moving average after falling below the lower boundary of the pink band on Wednesday.   The early selloff attempt pushed the index below the closely watch 2927 mark before buyer stepped in and pushed prices off the intraday low.  Market internal deteriorated as selling pressure accelerated but the momentum indicator is much closer to oversold than overbought zone.  This could help putting a short-term floor under the market.  With this in mind, we’d look to reduce exposure into intraday bounces.

For now, the trend channel moving average, currently at 2927, is the line in the sand. A failure to hold above key support suggested that most of the potential buyers at this level had already placed their bets.  The next batch of buyers typically sits at a much lower level and we’re looking at 2800.

In summary, market internal deteriorated as S&P moved down to test support at the trend channel moving average but downside momentum does not appeared strong enough to generate widespread breakouts. While there is a high probability that the late-day rally will momentum, a sustain advance above the late July high is needed before there is any real prospect of a change in the short-term downward trend pressure. With this in mind, we’d look to reduce exposure into intraday bounces.