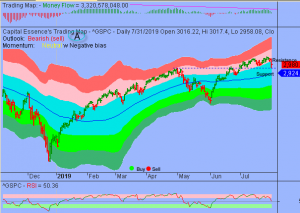 The weakness in the semiconductor space was mostly attributed to Advanced Micro Devices (AMD), which tumbled more than 10 percent after cutting its full-year revenue outlook. The group, like the broader market, did extend losses during Fed Chair Powell’s press conference.  As such, the iShares PHLX Semiconductor ETF (SOXX) fell 3.32 percent on the day, bringing its year-to-date gain down to more than 33 percent, outperformed the S&P.  Now the question is whether Wednesday’s selloff is a pause that refreshes or it’s a beginning of something worse?  Below is an update look at a trade in SOXX.

Our “U.S. Market Trading Map” painted SOXX bars in green (buy) – see area ‘A’ in the chart. SOXX has been on a tear in recent days after the late April selloff found support near the 2-year moving average, a key technical level based on moving averages.  The June rally tested resistance at the prior high set in April.  This week’s bearish reversal suggested that the resistance would hold, at least for the time being.   SOXX has support near 207.  A close below that level on a weekly basis will turn the short-term trend down and a test of the more important support near the 198 level should be expected.

SOXX has resistance near 220.  A sustain advance above that level could trigger acceleration toward the 127.2% Fibonacci extension near 230.  Short-term traders could use that level as the logical level to measure risk against. 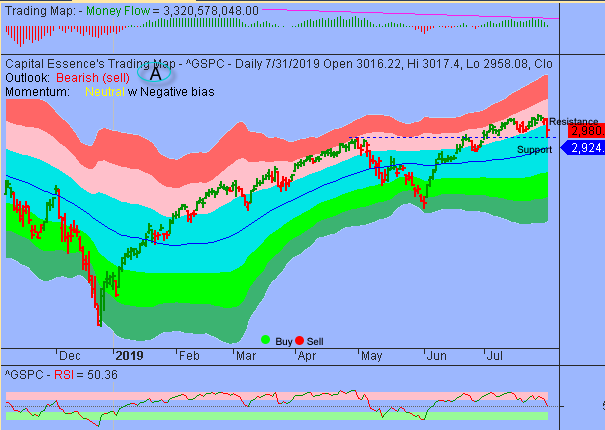 Wednesday’s downside follow-through confirmed Tuesday’s bearish reversal signal.  As expected, the S&P moved down to test support at the early June breakout point after falling below the important sentiment 3000 mark.  This is a short-term negative development, signify an imminent trend shift.  However, Money Flow measure still above the zero line so it’d be important to monitor the retreat and rebound behaviors over the next few days to determine whether recent breakdowns are decisive.

In summary, S&P broke key support Wednesday, signify a bearish breakout with downside target near 2924.  While seemingly vulnerable to further short-term weakness, it will be important to monitor the retreat and rebound behaviors over the next few days to determine whether breakouts are decisive.  We’d turn particular bearish if S&P closes twice below 3000.