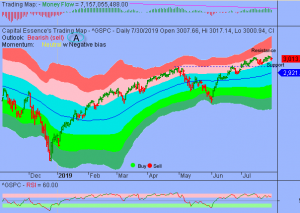 We’ve noted in the previous Market Outlook that: “there is a high probability that S&P is in for a ‘range-bound’ trading environment.  Nevertheless, the overall technical backdrop remains positive so traders should consider buying short-term market dips.”  As anticipated, stocks sold off in the early Tuesday session that saw the S&P fell down 0.7 percent and hanging just above the 3000 level before buyers stepped in and pushed prices off the intraday low.  For the day, the bench mark gauge slipped 0.3 percent to 3,013.18. The Nasdaq Composite dipped 0.2 percent to 8,273.61.  The Dow Jones Industrial Average gave up 0.1 percent to close at 27,198.02.  The CBOE Volatility Index (VIX), widely considered the best gauge of fear in the market, jumped more than 5 percent to close at 12.83.

Energy stocks gained traction as oil prices made a big move in the afternoon on no confirmed news catalyst. The noticeable gain today could have been derived from speculation that the Fed’s expected rate cut tomorrow could increase demand for oil.  As such, the Energy Select Sector SPDR ETF (XLE) rose 1.13 percent on the day, bringing its year-to-date gain up to just nearly 10 percent, underperformed the S&P.  Now the question is whether the rally has more legs?  Below is an update look at a trade in XLE. 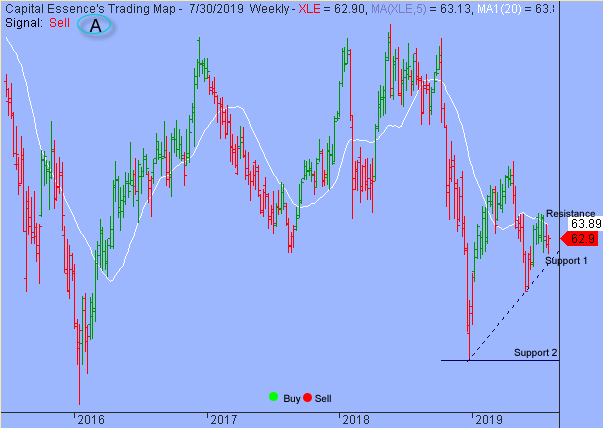 Our “U.S. Market Trading Map” painted XLE bars in red (sell) – see area ‘A’ in the chart. Over the past few weeks, XLE has been trending lower after the early June recovery rally ran into resistance near the 2-week moving average.  This level was significant when the ETF fell below in in early May.  The July downswing is testing support at the late 2018 rising trend line.  This week’s bullish reversal suggested that support would hold.  Nevertheless, given looming resistance near the 64 zone, there is no reason to turn particularly bullish until this zone is eclipsed.  XLE has minor support just below 62.  A close below that level will break the multi-month upswing and a retest of the 2018 low, around 53, should be expected.

XLE has resistance near 64.  Short-term traders could use that level as the logical level to measure risk against. 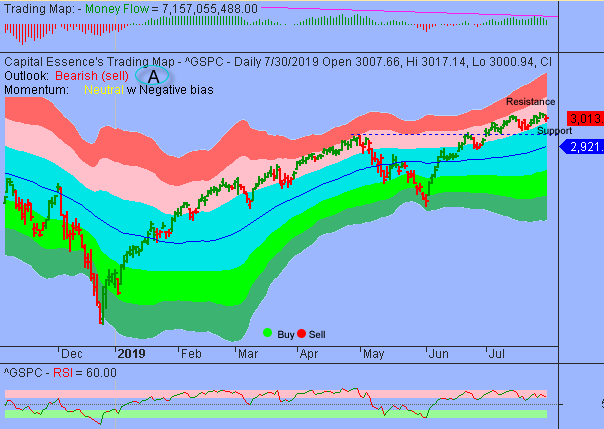 Once again, S&P moved down to test support at the important sentiment 3000 mark after last week’s rally ran out of steam just above the prior high set in mid-July.  The big picture remains the same. There is a consolidation near the lower boundary of the pink band, which represents digestion period in the after math of the June rally.  Money Flow measure and momentum had been deteriorated but downside momentum does not appeared strong enough to generate widespread breakdowns.  The lower boundary of the pink band, around 3000, is the line in the sand.  A failure to hold above that level would see an unwelcome pickup in downside volatility and a test of the more significant support in the 2900 zone should be expected.

In summary, recent trading actions leaving the S&P in what looks to us like a back-and-forth consolidation of the June rally.  This week’s correction is testing support at the lower boundary of the pink band.  This level was tested several times over the past months.  It’d be important to monitor the retreat and rebound behaviors.  We’d turn particular bearish if S&P closes twice below that level.