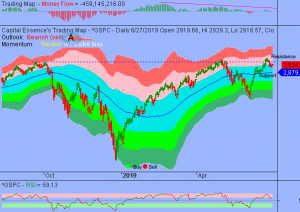 We’ve noted in the previous Market Outlook that: “after the June massive rally, stocks digested their gains in a consolidation phase that is giving way to a pullback in the S&P.  Support is strong in the 2900 area.  While more backing and filling would not be a surprise, a close below that level would see a massive pickup in volatility.”  As anticipated, S&P advanced 0.4 percent on Thursday, snapping a four-session losing streak, as investors looked forward to the G-20 summit in Japan.  The Nasdaq Composite increased 0.7 percent while the Dow Jones Industrial Average finished fractionally lower, weighed down by shares of Boeing (BA).  The CBOE Volatility Index (VIX), widely considered the best gauge of fear in the market, fell more than 2 percent to close at 15.82.

Few of the Chinese internet names caught a bid Thursday after the South China Morning Post report that U.S and China had reached a trade truce to advance talks. As such, the iShares China Large-Cap ETF (FXI) rose 1.11 percent on the day but is up about 10 percent YTD, underperformed the S&P.  Now the question is whether the rally has more legs?  Below is an update look at a trade in FXI. 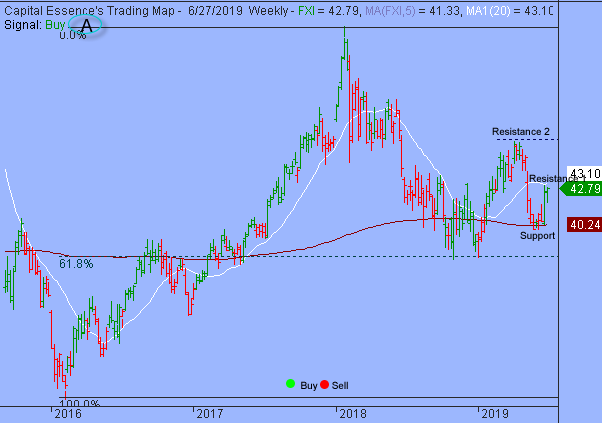 Our “U.S. Market Trading Map” painted FXI bars in green (buy) – see area ‘A’ in the chart.  Over the past few weeks, FXI has been trending higher after the late April selloff found support just above the 4-year moving average, a key technical level based on moving averages.  The June rally tested resistance at the 20-week moving average, just above 43.  This level is significant when the ETF fell below it in late April. It’s now acting as strong resistance.  A close that level signify a bullish reversal and opened up for a retest of the April high, just below 46.

FXI has support just above 40.  Short-term traders could use that level as the logical level to measure risk against. 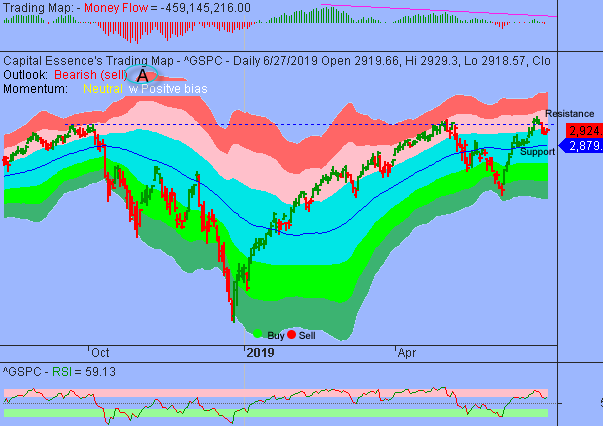 The big picture remains the same.  S&P continues basing sideways near resistance at the lower boundary of the pink band.  Money Flow measure is below the zero line, indicating a negative net demand for stocks.  Nevertheless, this week’s selloff rally has proved nothing as far as its staying power or as a possible trend reversal.  Market internal has been weakened but downside momentum does not appeared strong enough to generate widespread breakdowns.

While more backing and filling would not be a surprise, a close below 2879 would see a massive pickup in volatility.  We’d turn particularly bearish if the index closes twice below that level.

In summary, the big picture remains the same.  There’s an orderly high-level consolidation period near S&P’s 2916-2930, which represented the digestion period in the aftermath of the June rally.  Market internals had been deteriorated but downside momentum does not appeared strong enough to generate widespread breakdowns.